“Do you really think it’s a slasher?” 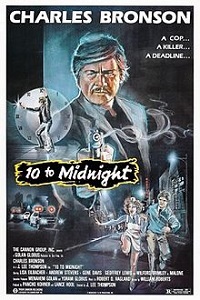 Laughter Lines: “If anybody does something like this – his knife has got to be his penis.”

The title of this could be 25 to Four or Quarter Past Eight for all the relevance it has to the film’s content, but perhaps it relates to the time this kind of 80s cop-vs-killer flick always seems to play on late night cable.

Like every other thriller of this ilk, 10 to Midnight pushes forth a rather maverick cop, who has an estranged daughter we know will be targeted by the maniac before the credits roll. In a sort of meta-slasher way, things begin with a crank confessing to murders, stating that when he “catches ‘em breaking the Lord’s Commandments, I slash ‘em with a razor!” while Charles Bronson’s grizzled detective Kessler clacks away at the typewriter. 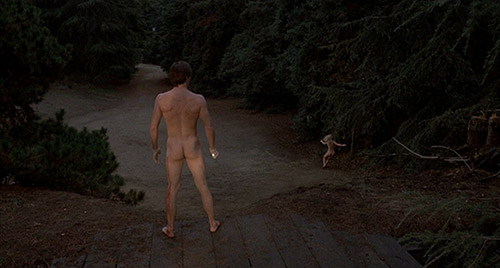 Meanwhile, we’re introduced to our skeezy killer, buff young office plod Warren Stacey (Davis), who torments two girls at the movies to serve as an alibi while he creeps out of the bathroom window and drives into the woods where he attacks a pair of lovers going at it in their van, killing the guy straight off, and chasing the nude girl through the trees until she just kinda gives up and cries a lot. What is notable about 10 to Midnight is that the killer is also buck naked when he slashes, so as well as the T&A we expect, there are also some fleeting cock shots, although most of the time his appendage is hidden by branches, bed frames, and other objects in the foreground. Like Austin Powers.

Kessler meets his young new partner, McCann (Stevens), and learn from the victim’s roommate that she kept a diary of every guy she slept with. This information reaches Stacey, who worked with the victim and suspects she may have written about him in her diary, when he attends her funeral. There, he bumps into Kessler’s nursing student daughter, Laurie, who asks if they’ve met before. Stacey breaks into the apartment of his victim to steal the diary – awesomely kept in a a box with ‘My Diary’ emblazoned all over it – and ends up knifing her roomie, who comes home. 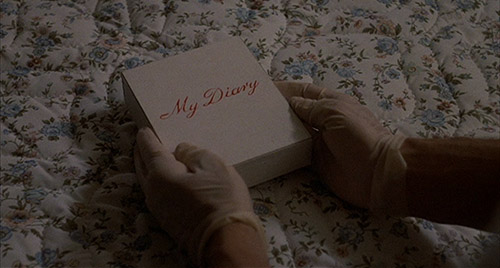 The cops eventually get to Stacey for an interview and Kessler immediately suspects him, in spite of the cinema alibi, and goes all out to prove it. Stacey takes to stalking Laurie, plaguing her with sexually-explicit crank calls, which leads to McCann hanging around to protect her and them eventually falling for each other, as always happens. This enables the slow repair of father-daughter relationship. There’s a trial, a dismissal, Kessler bugs Stacey until he goes after Laurie and her bouncy nurse friends at their dorm, in the film’s slashiest scene.

10 to Midnight functions entirely predictably when watched anytime after 1990, tidily checking off almost every cliche you could hope for in a Charles Bronson thriller, and is really only memorable for being a bit more exploitative than most, with the liberal attitude to nudity throughout, and the pervy stuff Stacey utters to Laurie during his phone calls. 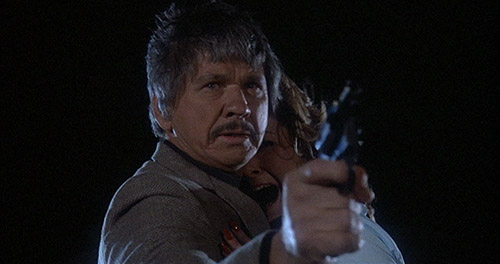 It’s clear the character is an amalgamation of Ted Bundy and slayer of nurses Richard Speck: Stacey stalks his nubile victims in his VW Beetle, is athletic and handsome, and ultimately ends up slaughtering most of his victims in their dormitory. When Bundy advised that the cops stage a slasher movie festival to catch the Green River Killer in the mid-80s, he probably would’ve creamed his pants over this one, which borrows heavily from his documented crimes.

Bronson, then 61, looks a little tired out going through the motions, but Eilbacher is a hoot as his sarcastic daughter: “Maybe we should check your prostate?” she says to McCann; “Oh, you’ve got to stop being so shy,” he responds. The other female characters are sketchy at best: Victims who either cower and squeal and make no attempt to fight back, an off-the-shelf mouthy hooker, and the over-acting manager who takes the call informing her of the first murder. 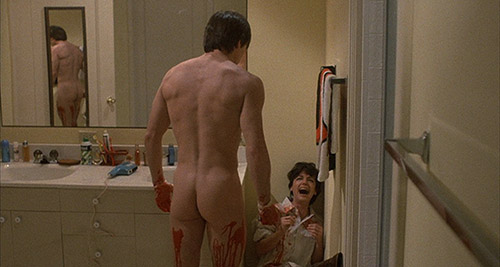 There’s some surface visual flair, but compared to Thompson’s previous slasher outing, Happy Birthday to Me, which stood out amongst its peers, this seems quite a pedestrian affair. “Do you think it’s a slasher?” someone asks when the murders are being discussed, alluding possibly to early production meetings about what film they were making.

Blurbs-of-interest: Carmen Filpi (the hotel clerk) played the kooky priest who gives Donald Pleasence a ride in Halloween 4; Geoffrey Lewis was also in Out of the Dark and Fingerprints; Wilford Brimley was in Death Valley.

tagged with before they were famous, Nu-di-ty, star power, the 80s