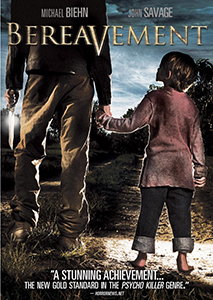 Don’t cry for me Stevan Mena, the truth is your prequel’s boring

All through it’s run time, I played Solitaire

I cut my toenails, I trimmed my chest hair…

Internal-Evita aside, Malevolence was one of those weird films, both overrated and underrated at the same time. For a no-budget slasher flick, it wrung loads out of the kind of Asian-influenced photography any big studio horror film would kill for.

As the middle part of a proposed trilogy, six years later came the first bit: Bereavement, which begins with the 1989 abduction of little Martin Bristol, who has a rare condition that means he feels no pain. The local schizo killer takes him from his back yard and spends the next five years trying to teach him to kill young girls.

Meanwhile – in 1994 anyway – recently-orphaned teenager Allison arrives in town to live with Uncle Michael Biehn and his little family. She’s a long distance runner and jogs past the creepy old shut down Sutter abattoir where loon and kid live in harmony, seemingly abducting a new girl every few days without anybody raising an eyebrow.

Allison has adjustment problems, hangs out with the local bad kid, and eventually strays into the old building where she is held captive, escapes, fights the killer and such. 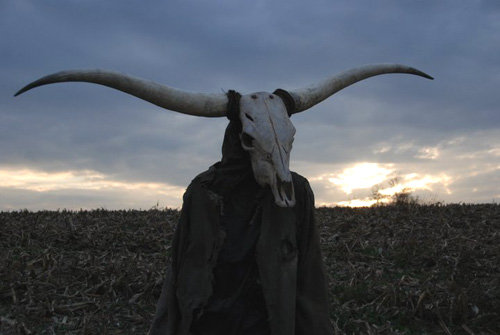 Unlike Malevolence‘s slow-burn homage to the really early days of under-lit slasherdom, Bereavement is more of a character study, setting things up for what will hopefully be a pretty good third entry.

Alas, unlike its predecessor (or whatever we call it considering it came first but follows the story…?), Bereavement is depressing and also kinda dull. For all of Mena’s beautifully orchestrated cinematography of pylons, vast fields and Sutter’s creepy old truck idling along empty roads, there’s long drawn out scenes where little happens (possibly accentuating the lack of life around the small town) or young girls are chained up and knifed to death.

It’s never explained why the police aren’t sniffing around for numerous missing ladies or why the killer only picks them. There’s an unsettling Bundy-esque bleakness to Sutter’s abduction technique (shown only once) and Bereavement only becomes an actual slasher flick towards the end.

And the end is downbeat, drab and a portent of doom. I was happy to see the cute puppy survive but after being impressed by what Mena sculpted out of what little he had in Malevolence, this has an aura of self-indulgence that I hope doesn’t leak into the final film. If it ever gets made.

Blurbs-of-interest: Michael Biehn was in The Fan and Cherry Falls; Alexandra Daddario was later in Texas Chainsaw 3D; John Savage was in Christina’s House.

tagged with after they were famous, prequel city, spoilers, the 80s