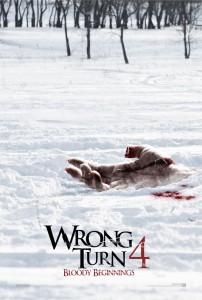 Dire-logue: “Who are they?” / “The cannibal hillbillies my brother told me about – who else could it be!?”

In some ways, it’s really nice that the Wrong Turn franchise overcame the less-than-stellar box office receipts of the kick-ass original to become a sort of straight-to-DVD Friday the 13th of the noughties. The downside is that said kick-ass material from the 2003 original has eroded over time into the crass sort of cliches that burden too many teen horror flicks.

In fact, referring back to the 5 things I wish they’d stop doing in horror films thingy I wrote a while back, Wrong Turn 4 ticks four of the five boxes: 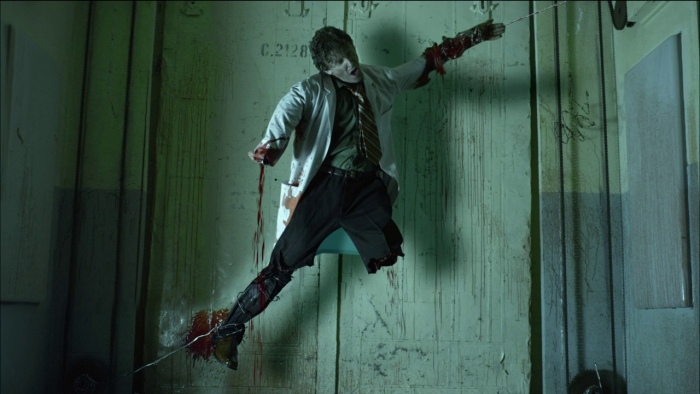 The beginning takes place in 1974 (what’s up with that year?) where the three brothers are locked up in an institution. They break out, cause major carnage and flee. Twenty-nine years later – so a matter of months before the events of the original film – said asshole college kids on a winter break get lost in a snowstorm and end up taking shelter at the abandoned asylum.

The inbreds seem to still live there, so how and when did they relocate to the shack and gather up all those cars? It should’ve been set in the 90s or something. Missed opportunity.

That said, Bloody Beginnings is better than Wrong Turn 3, following a more common body count opus and the kills are grisly and inventive and don’t rely too much on CGI. The teens’ numbers dwindle until there are just four girls left, who attempt to fight back with mixed results but there are too many characters in the first place, many of whom are indistinguishable from one another.

It’s been said for years that Jason should have a snowbound adventure and it looks like the WT team have beaten him to it for the time being. Maybe in Wrong Turn 5 the hillbillies will take Manhattan?