In 2011 (!) we enjoyed a good long moan about the shitty tropes that keep cropping up in horror movies. Well, now that I’m officially in my 40s I’d better get used to moaning more… Here are another five things that need to fucking fuck off: 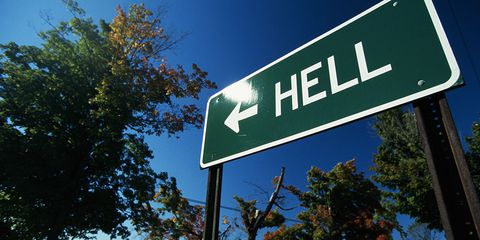 A killer who goes to work ridding the local area of virgins in a town that happens to be named Cherry Falls? Or the Tooth Fairy who can’t go into the light torments the townsfolk of Darkness Falls? Gimme a break!

Oh, but then we have loons ‘ironically’ named Marty Sickle, Jack who uses a Jackhammer, and Bobby Carver who likes to carve people up.

Waiting patiently for Bob Knifewielder to start offing the residents of Murderville, Missouri.

The House of the Devil looked the part alright, but suddenly we’ve got all these ‘back to basics’ or ‘lost classics’ tumbling out of the sky: The Sleeper, Lost After Dark, The Final Girls, Terrifier, Pool Party Massacre, Summer of ’84, Party Night…  Rough-around-the-edges production attributes are one thing, but missing reels? Rubik’s cubes and Cabbage Patch Kids everywhere while Girls Just Want to Have Fun and Karma Chameleon blast from the radio?

Give your cast short-shorts, big hair, and make them say ‘rad’ a lot, but the biggest giveaway though is always the eyebrows: So preened, so post-millennial. No one is fooled!

Some killers wait a year for their revenge, Kenny Hampson waited three years, Alex Hammond waited six, Mrs Voorhees waited 21… but most appear to be so crippled by OCD that they can only work in multiples of five, with a 10 year wait being the most common anniversary for sexy teens to go hangout at the olde rollerdome.

This is more a complaint about the short-sightedness of some genre fans who flock to various forums and boards to complain that any given film is “the worst ever” because it doesn’t feature a pair of tits, seemingly living under the illusion that slasher movies have to have them. Hell Night, My Bloody Valentine, Happy Birthday to Me… all nudity free. Hell, even the original Friday the 13th shows nothing but a fleeting, under-lit glimpse.

Randy told us: “This is the moment when the supposedly dead killer comes back to life for one last scare!” Unless your surname is Voorhees or Myers, or you exist beyond the plain the rest of us live on, being shot, impaled, burned in an explosion should kill you. Loons who successfully avoid death more than a couple of times are becoming a little too prevalent – Mick Taylor, I’m looking at you here, mate.

tagged with get your own ideas!, Nu-di-ty, slasher, the 80s