Is it a game or is it their combined IQ? 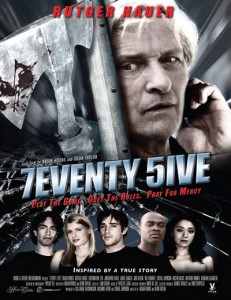 “Play the game. Obey the rules. Pray for mercy.”

Dire-logue: “Does it really matter whose fault it is? There’s a fucking psycho with an axe in this house – how about we blame him?”

The title could be 6ixty 2wo, 4orty 9ine or 8ighty 3hree for all its relevance to this back to basics students n’ slaughter flick, which I’m generously giving an extra star for its impressive midriff – more on that later. Things begin retro stylee with a group of kids at a sleepover making prank calls while their parents party in the lounge. They pick the wrong victim and an axe wielding maniac turns up at the house and chops up all the adults.

Ten years later (or twelve, depending on who’s talking), grown-up ringleader Marcus and his gaggle of friends – known as ‘The Crew’ – vacate campus for an end-of-finals party at rich boy Brandon’s house – which, of course, is in the middle of nowhere. Meanwhile, the other kids who survived the decade old massacre are being murdered and Rutger Hauer’s one-note detective is investigating the slayings with help from sexy chick Yeo. 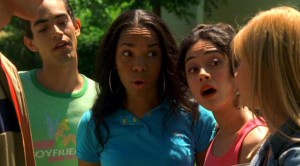 Go on…you know YOU want to hang with ‘The Crew’. Girl.

Apparently having learnt nothing from what happened before, Marcus gathers the party guests together for a game of ’75’, a crank call contest where the object is to dial a random number and keep whomever answers on the end of the line for 75 seconds, without them hanging up or realising it’s a joke. The golden rule is to conceal the number before dialling, an error Marcus’s dense friend Scott makes when they happen to ring up another psycho… 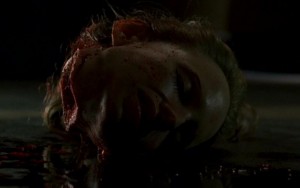 Some time later in the evening, the door bell chimes and in steps a Parka-concealed killer, complete with massive axe and bloodlust. Yes, it’s a total rip off of Urban Legend at that very moment. However, this is forgiven as the massacre goes into overdrive and non-essential background teens are lined up and taken down in quick succession before the main group lock themselves away and argue about who’s fault it all is (see Dire-logue). More deaths ensue and the killer is revealed, but nothing is quite what we expected, despite some fairly big clues, flashed back to when the requisite exposition/buying-time scene occurs and, of course, Hauer (evidently waiting for the cheque to clear) and Yeo arrive right when it matters… Strangely, when faced with the killer’s explanation, Marcus still doesn’t admit that, y’know, maaaybe he should have learned that playing 75 results in D E A T H and should be left well enough alone. 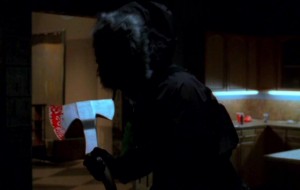 The twist, and what is alluded to from earlier in the film, is, along with the massacre supreme, what elevates 7eventy 5ive above the usual straight to DVD fare. Further stars may have been applied to the rating were it not for the characterisations. With no central female figure as the heroine – whiter-than-white girl Karina comes closest – main character shoes are filled by director/writer Hooks as Marcus and his short-fused pal Kareem, both of whom cave to fulfill the stereotypical ‘black guy’ role, expanded from the “brothers don’t last long” role of yesteryear, they may be the nearest thing to heroes here, but they’re just not likeable. Nor, it seems, are any of their friends. Karina is the indecisive and easily won-over girlfriend of cheater Brandon, while the other girls do ‘sassy’ and say ‘girl’ a lot, the token gay boy is camper than a row of pink tents and still manages to bag a burly cowboy for the night and the chubby guy is seen as a gross parody of himself. We want all of their I’m-33-playing-a-21-year-old-asses to DIE! …Girl! 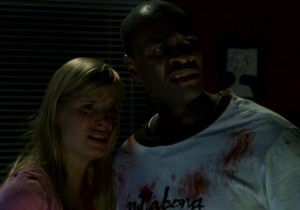 “I pass for a college student…really I do!”

Unfortunately, awful characters are a bacterial disease in modern horror, it’s just easier than making any of them worth two shits. Mercifully, 7eventy 5ive gets by on a well-written mystery element and evident respect for making the genre fast and fun. The only certainty is that as many people who say it’s better than the norm will call it wretched crap, but those people have probably only seen two dozen slasher flicks anyway. 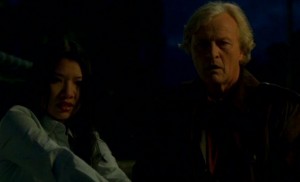