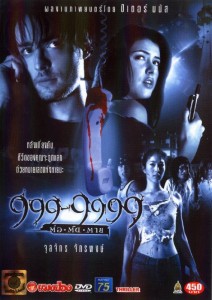 I love Thailand, it’s one of the best countries I’ve been to and probably my favourite in Asia. The people are great, the culture has a way of uplifting you and they make some entertaining movies there too.

So the legend goes in this Final Destination pilferer, if you dial 999-9999 after midnight, you can ask for anything you want and you’ll get it. The only catch being that once you have it, you’ll die. This is the death trap which ensnares a group of rebellious high school kids who call themselves ‘The Daredevil Gang’ because they like nothing more than playing pranks around campus. See how mischeivous they can be: 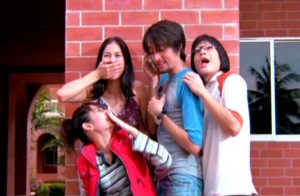 After it is reported that a girl was found impaled halfway up a flagpole at a school in the north (magazine byline: “so young, so hot, so sad!”), the gang finally learn of 999 (‘gau gau gau’ as it sounds) from pretty transfer student Rainbow, who went to the same school as flag-chick. She advises them not to call but as they become desperate to win TV contests, grab places at the Thai-Japanese space academy, own their own Ferrari or simply be accepted by their peers, so they begin falling victim to the curse of gau-gau-gau when the creepy voice calls them back to collect payment. 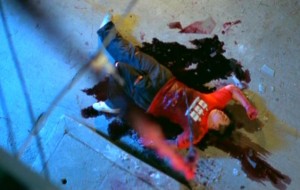 Cue gory deaths by gas explosion, a vacuum chamber/circular saw scenario and the car wash from hell. While cheap special effects work and some questionable comedic implants (most of which come from an overweight wannabe who makes the fatal error of asking 999 to turn him thin!) makes some of these sequences laughable (see below!), the intentions are spot-on with the counter advantage of same ace camera work and its creepy Ring-style eastern influence. And while the real mystery behind 999’s murder spree is never satisfactorily resolved – leisurely setting things up for a sequel if one were needed – this is an engaging film with some great ideas helping to cement Asia’s reputation as producers of great horror. 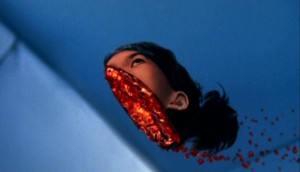 If you can’t tell, that’s half a head floating around inside a no-gravity chamber thingy

tagged with get your own ideas!, gore o'clock, J-horror, slasher