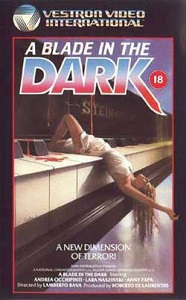 A BLADE IN THE DARK

A.k.a. House of the Dark Stairway

Occhipinti plays Bruno, a young composer commissioed by a director to score a horror movie. He rents a roomy, minimalist villa where the former tenant – the mysterious Linda – seems to have left something of a reputation imprinted.

When a stock beautiful young woman stops by to collect a her diary but then disappears, Bruno suspects something bad may have happened to her. His moody and secretive girlfriend Julia is more concerned with him seeing her perform in a play, and the groundskeeper Giovanni (for once not presented as mentally challenged!) likes to mind his own beeswax.

A friend of the missing girl then comes by and also vanishes, prompting Bruno to convince himself that the elusive Linda is somehow to blame …and also something to do with the plot of the movie he’s scoring.

Some genuinely tense set-ups distinguish A Blade in the Dark from its contemporaries, but it’s the near-repulsive violence that will loiter in your memory, as the heel-wearing killer dispatches victims with a nasty array of weaponry. Echoes of Dressed to Kill dominate the finale as well as a macabre twist to the final girl vs psycho sequence, but it’s ultimately flawed by its length and watered down story.

Blurb-of-interest: Michele Soavi directed Stagefright in 1986 and also acted in Absurd and Opera.