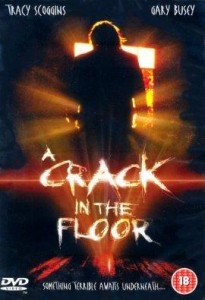 A CRACK IN THE FLOOR

“Something terrible awaits underneath…”

Dire-logue: “We made a pact to take these trips ’til we’re old and grey, or we die. Whichever comes first.”

Another cheapo attempt to bring Friday the 13th into the 21st century that pits six college kids against a Jason-like hermit who resides in the basement of the standard horror movie cabin-in-the-woods, where you just know these scholars are gonna end up by nightfall. Seems our loner doesn’t take kindly to strangers since two hicks raped and slaughtered his mom thirty-three years earlier.

With a few familiar cast members in the wings, it’s surprising the project came off as cheap looking as it has. Bo Hopkins is the local sheriff who may be on the brink of solving all of the missing persons cases that flood in whenever anybody hikes out into the trees; Gary Busey has about three minutes of screen time as a derange chicken chaser. You get the feeling he was helping out a friend.

Mario Lopez – Slater from years-gone-by’s Saved by the Bell, who also cropped up in the lamentable Fever Lake – leads the doomed pack of off-the-shelf teenagers, including Alicia Witt-a-like girlfriend Daisy McCrackin.

The rest of the characters and plot appear like a second-generation photocopy of Friday the 13th Part III, with two stoners and a newly-pregnant couple. The cabin’s not too dissimilar either… In spite of these flaws and an essential lack of blood (half the murders are off camera or fleeting) it’s not the tragic misfire it could have been. Everything certainly looks like the producers put some effort in and the script flows along quite efficiently even through the kids set up as the heroes are quite casually killed off.

A Crack in the Plot may have been a more fitting title.

Blurbs-of-interest: Bo Hopkins was also in Sweet Sixteen and Uncle Sam; Rance Howard was also in the Toolbox Murders remake; Daisy McCrackin was one of the reality-teens in Halloween: Resurrection.

tagged with after they were famous, Friday the 13th, get your own ideas!, rip-off central, slasher, spoilers, star power