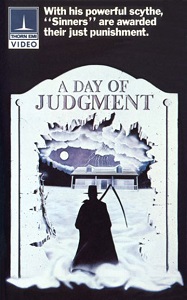 A DAY OF JUDGMENT

“The night HE came to collect his own.”

Laughter Lines: “If you’re going to kill me, give me time to pray!”

This plodding oddity is notable only for being one of very few period slasher films, being set in a small Southern town in the 1920s, where, after what feels like hours of boring, dull scenes of dialogue, a mysterious cloaked figure has come to lay to waste the nasty folk.

Beginning with the departure of the local Reverend, who laments he has failed to make the local people change their sinful ways, very slowly and boringly we’re introduced to the various characters in town:

It takes almost 40 minutes for the first of these unpleasant reprobates to be taken out, dragged into the earth by creepy hands that spring from the soil. Then some guy shoots himself because fat bank manager tries to foreclose on his farm. Another guy dies during a fight and his wife and her lover cover it up by making it look like a car accident. 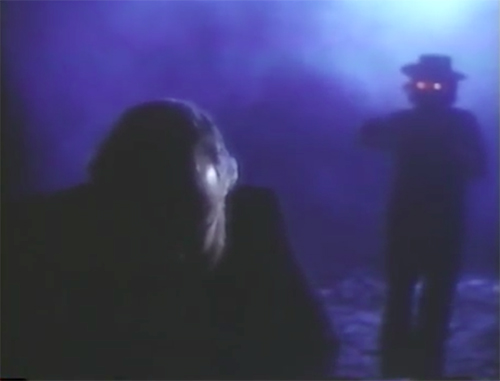 It’s all really confusing and boring. Why aren’t they being slashed up by the cloak-dude?

Some double-crossing crap is revealed, I zoned out. More people are being shot than sickled.

The score sounds like Heads, Shoulders, Knees and Toes.

My God, 97 minutes has never felt so long. This is worse than church.

SHIT A BRICK AND FUCK ME WITH IT – THE TWIST IS THAT IT WAS ALL A DREAM.

This isn’t a slasher movie its a Christian propaganda tale of A Christmas Carol proportions. The film even ends with the Ten Commandments scrolling up!

Blurbs-of-boredom: Jerry Rushing was the coach in Final Exam; Helen Tryon, William T. Hicks, and Larry Sprinkle were in House of Death.

tagged with I want to die, spoilers, the 80s, weird-ass twist, what the hell!?, who finances this crap!?