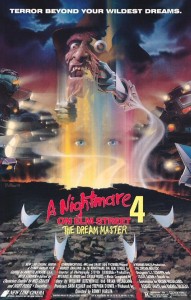 A NIGHTMARE ON ELM STREET 4: THE DREAM MASTER

“Are you ready for Freddy?”

Dire-logue: “Hey, yo Needledick – I bet you’re the only guy in school suffering from penis envy!”

The last really decent hurrah for Mssr Krueger was also the most successful in the canon, almost doubling its $7m budget on the opening weekend alone and eventually grossing nearly $50m the US alone, leaving aged onlookers Jason and Michael trailing by some distance.

So what made it so successful? Dream Warriors was an amazing sequel, hoovering up more than ten times its own budget the previous year. Freddy had become the American mass murderer of choice, appearing on everything as the series grew more and more in popularity, reaching phenomenal levels of pop cultural significance by the time a third sequel was rolled out, directly by a then unknown Finnish filmmaker called Renny Harlin…

While The Dream Master is a fun outing, it’s noteworthy that it’s a lot less bloodthirsty than the films that preceded it. Effects work is on top form but if it’s blood you’re after, there’s not a lot on show, possibly drawing in the kind of audience who wouldn’t typically show up for a slasher movie and shooting it up with so much humour that you’d hardly believe it was a horror film at all at some points. Add to that the film is practically sponsored by MTV, this was going to be a hit regardless. 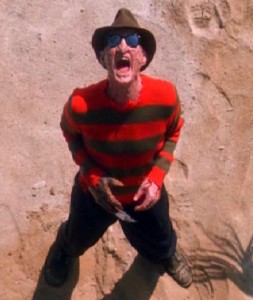 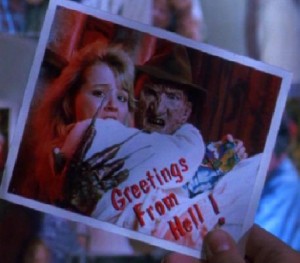 Picking up an unspecified amount of time after the events of Elm Street 3 (though the back of my old VHS said it was two years later), surviving dream warriors Kincaid, former mute Joey, and Kristen (now played by Tuesday Knight), are finally living as regular American teenagers, gladly free of the curse of their deadly night terrors. But how often does that kind of tranquility last in small towns with a mythical killer legend? Not very.

Resurrected by the magical fire-piss of Kincaid’s dog – ! – Freddy does away with the boys in quick succession and then goes after Kristen, who, in her last ditch attempt to stop the terror, transfers her ability to pull others into her dreams, to her goody-two-shoes friend Alice.

Seems that with all the Elm Street kids now dust, Freddy doesn’t feel like giving up and needs Alice to pull her friends into her dreams for his homicidal kicks. So the asthmatic girl is sucked to death during a chemistry test, Alice’s brother is taken on by an invisible sensei, and insect-a-phobic gym fiend Debbie is turned into a giant roach! 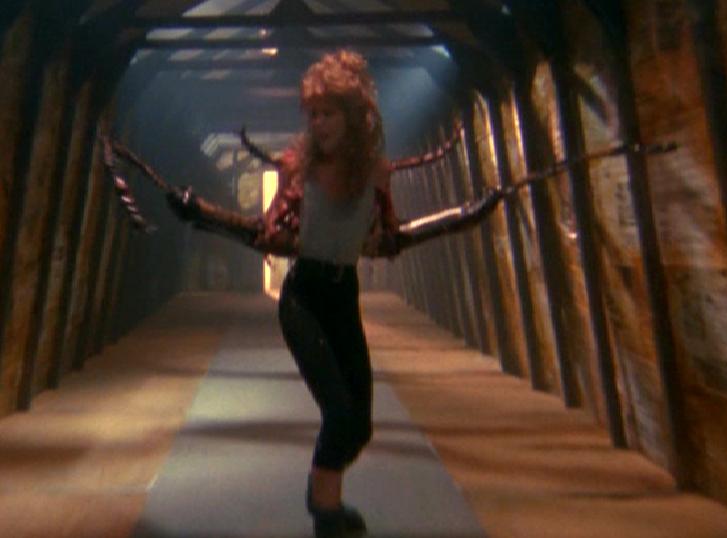 What prevents this slick entry from ticking all the boxes – besides the restrained grue and general non-threat of Freddy – is the nomination of Alice as the new final girl. Lisa Wilcox does fine in her homely shy girl routine but the character is scripted to type to the extent that she’s a virtually parody of the good and true final girl: all sensible, conservative clothes and chaste demeanour. With each death, Alice takes on an aspect of the personality of the deceased until she’s ready to take on Freddy as a hardass.

The title suffix refers to Alice’s concept that eventually bests Krueger; a little ditty that alters the words to As I Lay Me Down to Sleep… But who is the Dream Master? Is it Alice? Freddy? Some non-corporeal other designed as a device to angle the film on? Nobody really explains, but it works and Fred is done in about as icky-ly as it gets in 80s horror.

Consequently, the film is fairly even in its ratio of what works to what doesn’t. It’s not remotely scary but the popcorn appeal is maxed out and the cast are an extremely likeable ensemble: You could actually believe that they are friends. 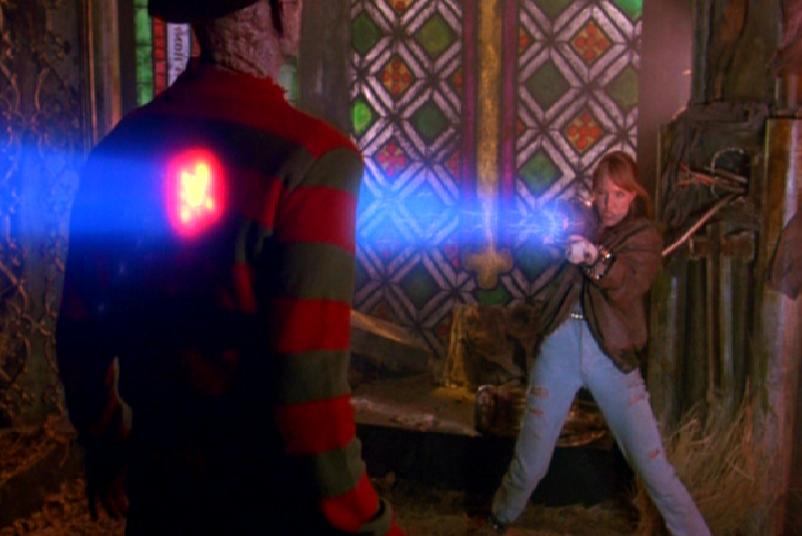 The Dream Child, while continuing with the surviving characters, attempted to back-pedal to scarier times and subsequently tanked and, to date, the winning formula seemed lost with the 80s, which is no bad thing, merely a time-stamp of a time when all everybody wanted to see was a razor-fingered child molester eating a pizza made out of dead kids’ faces…

Blurbs-of-interest: Englund, Wilcox, Hassel and Mele all returned for the next movie. Aside from his other turns as Freddy, Robert Englund was also in The Phantom of the Opera (1989), Urban Legend, Heartstopper, Behind the Mask: The Rise of Leslie Vernon and Hatchet. Ken Sagoes was later in The Back Lot Murders. Andras Jones was in Far From Home with Drew Barrymore the following year. Renny Harlin also directed Mindhunters.

tagged with Nu-di-ty, one two Freddy's coming for you..., sequel city, slasher, star power, the 80s, yo! Hollywood