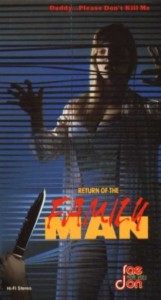 RETURN OF THE FAMILY MAN

Holy homicide, Batman! I’ve seen some weird ones but this South African export might just outdo the lot of ‘em.

Beginning with a totally superfluous shoot-out between some drug dealers, pizza delivery boy-slash-witness Alden decides to take an early vacation by joining friends Vickie and Brian, who are going away to try and mend their failing relationship. Turns out that the lush mansion they booked is not only a dilapidated heap that has also been let to another mixed-bag of teenage tourists but also was the childhood home of a cheeky mass-murderer known as The Family Man. ‘Cos he likes the kill families, I guess.

By nothing more than one of those only-in-a-slasher-film coincidences, said killer escapes from his prison bus after a decade incarcerated and immediately heads home to dwell on macabre memories. What ensues is fairly predictable…or is it?

Once the teens discover that a couple of their friends have been deadified, things go all A-Team and they make some gadget-traps meant to give the maniac a dose of his own medicine. Logically, they fail and he bumps off a few more before the survivors get their own back.

It was a while ago that I saw it but I recall it being one of those films that pretends it’s all been made in the USA when regional accents clearly tell us otherwise. However, to further confuse matters (and audiences of a discriminating ear), the tourist teens number among them natives of France, India, Ireland and an English guy who appears to be an early prototype of Spike from Buffy the Vampire Slayer - complete with peroxide blonde hair, black punk clobber and an attitude to match (see Direlogue).

The sky-high bodycount, a sure runner for the highest ever in the genre, isn’t all down to the killer but serves as a good distraction to the otherwise tried and tested elements of the film, which is pretty much a watch once affair.

tagged with accents from hell, get your own ideas!, hair don'ts, slasher, slasher films that aren't supposed to be funny but are funny, the 80s