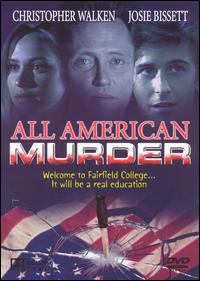 “He’s about to enter a jungle of sex, sleaze and murder… He’s going to college.”

Dire-logue: “I’ll be history before my next history class.”

Rebellious back-chatter Schlatter (cool, huh?) – Artie – is given ‘one last chance’ by his Judge dad to make something of himself and is sent to the prestigious, depressingly clean-cut Fairfield College where he falls for loved-by-all sorority chick Tally. When she is incinerated before his very eyes, suspicion immediately comes knocking at his door in the shape of Christopher Walken’s detective. Not working in Artie’s favour is a history of pyromaniacally-themed incidents of yore.

Walken gives Artie 24 hours to find the real killer before the murder is pinned on him. As the minutes tick by, it transpires that perhaps Tally wasn’t the god-fearing, picture perfect daughter-of-a-senator she was seen to be by everyone on campus. And those people who knew valuable information about her that might just clear Artie’s name find themselves power-drilled, bitten by snakes or blown apart by the old grenade-down-the-pants.

Genre addicts should have no trouble establishing the identity of the killer by the finale, but it’s still a very satisfying conclusion to a strangely seldom seen and under-appreciated mystery thriller.

Blurb-of-interest: Mitchell Anderson was in Deadly Dreams; Josie Bissett was in Mikey.