All you can do is step back in time 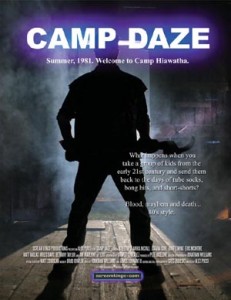 “The only way out is death.”

On paper – or indeed the webpage – Camp Daze reads flawlessly: a quartet of teenagers driving to Maine find themselves stranded at kooky Camp Haiwatha, which is stranded in the summer of 1981, perpetually reliving the night when a psychopathic killer went on a bloody rampage. Fucking awesome.

As an homage to a certain groundbreaking summer camp slasher film, complete with a block-like title card smashing through a pain of glass before it was renamed Camp Slaughter for DVD, mixed with a Groundhog Day riff, this takes some amusing pot-shots at the most famous franchise in slasherama but ultimately chokes on its shoestring budget, which make it look unwatchably cheap and badly made. Y’know, worse than the films it apes. 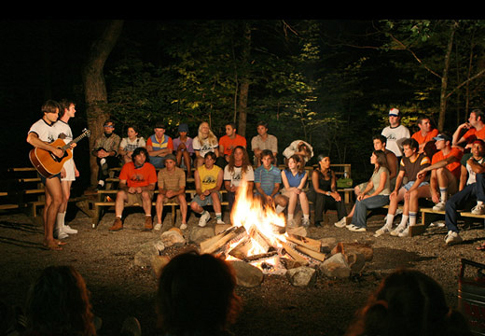 Most of the film’s problems lie in the visual: careless edits and amateurish gore effects work don’t pack a punch and appear odd under the impressive orchestral score. Slot this in next to terrible acting and poorly conceived characters who suck the fun out of it all, with no real central figure to root for. The eventual sole survivor, Jen, is the sassy black girl who says ‘fuck’ a lot and keeps bringing up Jason, much to the confusion of the camp counsellors.

Even with the strange, not-quite-sure homoerotic undertones and a ballistic body count – possibly a sign of a poorly thought out script – nothing stands out and the obnoxious twist ending just induces rage at the laziness of the plot.

With a better collection of actors and shot with more care, this could’ve been a minor classic but it’s destined to become just one more post-millennial DTV slasher film that claimed it was recapturing the old school methods but failed miserably.

tagged with Friday the 13th, gay stuff, I love Jason, slasher, summer camp, the 80s, weird-ass twist, what the hell!?