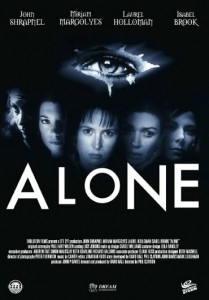 There’s some real ambition in this arty Brit-flick, which toured European festivals for a full year before it was given a straight-to-video release. Made up largely of point-of-view photography that identifies us to/with the character of Alex: a compulsively clean outpatient who likes to write letters to, and then kill, young women whom Alex perceives to be lonely.

Beginning as a gritty detective drama mixed with the POV work of Alex’s strange existence and visits to caseworker Margolyes, whose advice is to try and romance a girl who is soon after found murdered. However it is her pretty American assistant Charlotte who eventually becomes the heroine when the entire thing morphs into a pedestrian clone of Halloween II as Alex tracks Charlotte down to a local hospital.

The most effective scene is when a girl returns home to find all of her kitchen has been cleaned, her fridge magnets neatly lined up and her spice rack contents faced up. All very Sleeping with the Enemy! We’re never granted a look at our killer, only Alex’s hands make it into the frame.

Alone doesn’t try to be a slasher film, with its miserable, colourless photography and the stupid twist ending that isn’t really a twist at all given the first-person voice used to thread things together. Actually, the ending downright sucks, yanking the rug out so violently that it tears as it goes! Director Claydon later helmed the Horne/Corden “comedy” Lesbian Vampire Killers.

tagged with get your own ideas!, Rule Brittania!, slasher, spunky final girl, weird-ass twist, what the hell!?