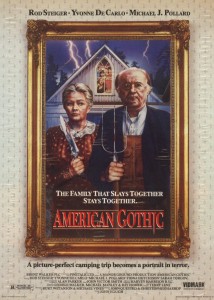 A.k.a. Hide and Shriek

The famous painting of the same name by Grant Wood is sort of lampooned in this bleakly engaging UK-Canadian production, in which three couples on vacation land their sea-plane on an island inhabited solely by aging couple Steiger and De Carlo, and their three grown-up children, who dress and act like pre-teens. Bet the outlanders wished they just drove to the woods and met Jason instead.

Mom and Pop are the puritan-type Bible-bashers who welcome to the newcomers on the proviso that they don’t fornicate, take the lord’s name in vain, yaddah yaddah yaddah… all the usual stuff, while the ‘children’, Fanny, Woody, and Teddy, just want to play with their guests and go about killing them one by one, by hanging, knitting needle, and, most memorably, cliff-edge swing. 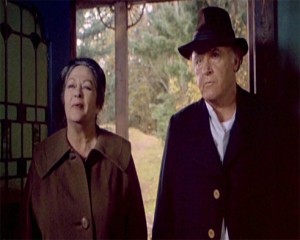 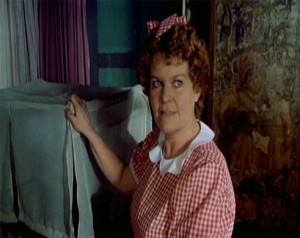 Depressed Cynthia, on the trip to try and get over a miscarriage, is the only one remaining, cracks up and joins the family until Fanny makes the error of getting her to play mother and she cracks-back and takes her revenge on the family.

While avoiding the usual slasher movie pitfalls, American Gothic is interesting to say the least; well acted and pleasantly diverting from what would’ve been had they run into Jason or one of his Xeroxes, though we must wonder why, once they realised how ‘not normal’ their hosts were, they didn’t just camp out by their plane until it could be fixed. Entertaining stuff, a positive speed bump from the declining era of the genre.

Blurbs-of-interest: De Carlo was another weird mama in Silent Scream; Michael J. Pollard was also another weirdo in Sleepaway Camp III; Stephen Shellen was in The Stepfather.