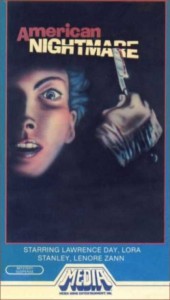 “Pray you never have one.”

Dire-logue: “Somebody tries to kill me, I get a little nervous.”

Good old Canada, making a film called American Nightmare. Who did they think they were fooling, eh? Well, me I guess but I was only 3 in 1981 so it wasn’t a difficult feat.

Seems that a razor-wielding psycho has it in for the girls who dance at Club 2000. Nothing’s called Blah 2000 anymore, is it? Feels like we live so futuristically. High on the killer’s list is the beautiful Louise, who reluctantly joins forces with the out-of-towner, who more than proves he can take care of himself in the big bad city.

The real ‘American nightmare’ comes in the form of the tone; almost exclusively set in the sleazy world of pimps and pornography. The camera exploits its victims as society and, ultimately, the killer has – putting them on show for the voyeuristic pleasures of the slobbering men who come to the shows – and then brutally slaying them.

The film holds more than a hint of misogyny and homophobia to it as all the female characters are shown nude and the only male victim is a gay transvestite – dubbed the ‘degenerates’ of society. The only victims are the girls and the gay – not even the pimps and pervert motel owners fall victim to the razor.

Thankfully, once the mystery has agreeably unfolded, the ‘sleaze’ and ‘degeneration’ binds itself neatly to the so-thought upstanding members of the city who have deep involvement in the murders.

There’s an amusing scene where genre-regular Lenore Zann is stalked by the killer, who hisses her name – Tina – from the shadows, just as Freddy Krueger would do in a few years’ time.

A very interesting and unfortunately rare piece of horror with a cringetastically good twist and a cast of good soon-to-be’s, including future Baywatch hottie Alexandra Paul.

tagged with before they were famous, Canuck, gay stuff, Nu-di-ty, slasher, the 80s, weird-ass twist