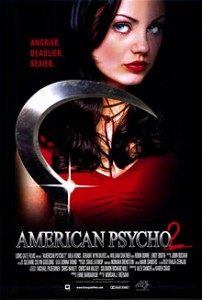 Laughter Lines: “I’ll make sure to get you home in time for Murder She Wrote.”

Burgeoning starlet Mila Kunis is apparently not fond of her involvement in this bizarre sequel to Mary Harron’s adaptation of the Bret Easton Ellis novel. Where that film examined the vicious world of capitalism, where male swagger competing eventually spills over into serial murder, AS2 is a straight up slasher flick.

Kunis is college freshman Rachael, whose babysitter took her along on a date with psycho killer Patrick Bateman and became his last victim before Rachael stabbed him dead with an ice pick. Undetected in this incident, Rachael successfully gets on to a criminal profiling course run by ex-FBI officer Robert Starkman (Shatner) whose one career black spot is the Bateman case.

In the week before Spring Break, Starkman is set to elect a teaching assistant for the following semester, and there’s no task Rachael won’t undertake to ensure she gets the job, which will lead her to her destiny – FBI training at Quantico. Firstly, her goal entails offing the three most likely contenders: Rich boy Brian, roommate Cassandra, and brainy Keith. Matters are further complicated by her interfering shrink who, after one session, diagnoses her as a ‘textbook sociopath’ and Rachael finds herself killing excess individuals to get her own way.

Sanger and Craig’s script shares more in common with the likes of Ripper: Letter From Hell and obsessed-femme-stalker sequel Teacher’s Pet than its predecessor. Kunis is a good soap opera style bad girl, but her narration of events severely tugs at the rug of credibility, and without the killings this would play more like an episode of Clarissa Explains It All than a serial-slasher pic.

Handsome production values go some way to distracting the viewer from what is really a wafer thin cash-in, probably rewritten to awkwardly tie in with the Bateman plot in order to get the greenlight. Still, seeing William Shatner traumatised is good for a laugh.

Blurbs-of-interest: Shatner was in Visiting Hours back in 1981; Lindy Booth was in Wrong Turn and the lead role in Cry_Wolf; Robin Dunne was in Scarecrow.

tagged with before they were famous, death on campus, get your own ideas!, sequel city, slasher, star power