Anyone for a game of Operation? 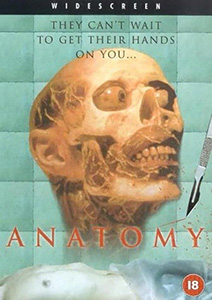 “They can’t wait to get their hands on you…”

A classy medical slasher that’s one part Urban Legend, one part 70s thriller Coma, that gets a lot of mileage out of creepy settings and questionable characters. Some spoilers follow.

Pre-big-role Franka Potente is super-smart Paula Henning, who wins a place at the Heidelberg University, against her doctor father’s wishes. She becomes suspicious when a classmate with a rare heart condition ends up on her slab with a gum-like blood consistency.

After some covert investigation, she uncovers the secretive Anti-Hippocratic Society, an ancient order she thinks is experimenting on still-alive subjects with rare disorders to get a better insight into the diseases that will soon claim their victim’s life. Poking around in their affairs soon leads to threats on her life, with a creepy blood candle under her bed. Her new friends think she’s paranoid, or taking the presence of the AHS too seriously.

Anatomy changes tack slightly as it goes, keeping its body count fairly low in the first half and once a revelation is made that pretty much changes everything, the film becomes less of a conspiracy sect-against-honourable-doctor thriller and side-steps into slasher territory as it transpires the society is pretty much benevolent save for a couple of rogue doctors who aren’t playing by the rules. But who?

Once identities begin to be revealed, there’s a great but short chase scene where a fleeing victim is injected with the formula that turns blood to gum. As she runs, she flops and begins to seize up, left to crawl inch by inch towards sanctuary. Later on, Paula engages in cat and mouse theatrics with the scalpel-wielding killer, which features a great moment with those library shelves on rails that can be cranked and moved. 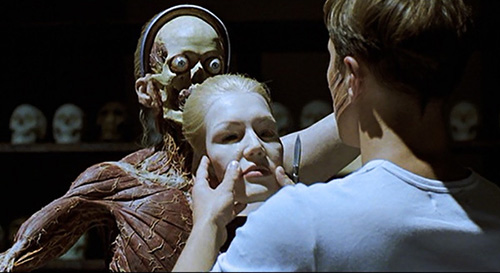 Meanwhile, the second killer, injected with the gum-stuff, desperately tries to find saline to reverse the effect. It’s excruciating as his functions slow down and he can’t get the needle to the vein in time. These scenes amp up what could’ve been a rather mediocre medical chiller, marinading it in a savagery that is offset by a little random comedy.

A understatedly fine affair, with interesting characters (Loos’ party girl with a sky-high IQ is great), upmarket production quality, and some great tension on both sides of the battle, which makes for that rare critter: A rather intelligent slasher pic. Followed by a sequel I’ve not seen, that sounds like it wouldn’t be reviewed here. 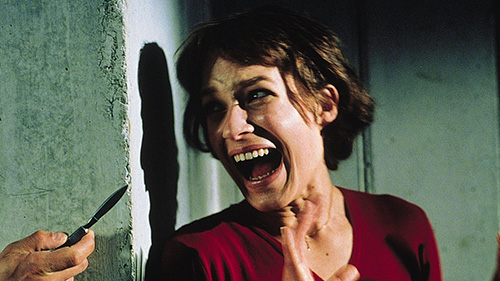 tagged with before they were famous, Euro-horror, Nu-di-ty, slasher, spunky final girl