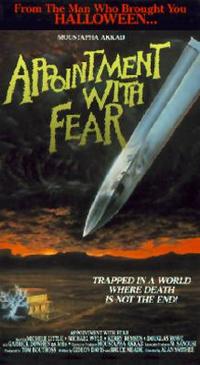 “Trapped in a world where death is not the end!”

Abject weirdness and boredom collide in your common-or-garden mid-80’s cosmic-slasher flick featuring chick from random Friday the 13th sequel. That’s Appointment with Fear in a sentence.

A woman is fatally stabbed – after putting up as much of a fight as grass does against a lawnmower – and, before she dies, gives her baby son to autistic freakshow Heather, who paints a blue visor around her own eyes and pretends she’s in a jar. Yes, really. Heather and her friends have a party at a deluxe post-modern arty house in the middle of nowhere that is, of course, crashed by the killer.

The twist here is that said killer is actually in a coma at a state mental hospital and only his spirit roams free to kill because he has been possessed by an ancient Egyptian tree-god. Again: yes, really. Tree-god demands he kills his infant in order to gain another year as a god. This must be the only slasher film I’ve ever seen where the final girl (Little) uses one of those portable listening device satellite-thingies to evade the killer’s advances. She’s an annoying, slightly evil looking girl for a heroine. This factor, accompanied by crud production values, the director choosing to credit himself as Alan Smithee, and the enigma that is Heather and her invisible jar, make this an appointment to skip.

Blurbs-of-interest: Debisue Voorhees played Tina in Friday the 13th Part V: A New Beginning and was also in Innocent Prey; it was produced by the late Moustapha Akkad who, of course, oversaw most of the Halloween franchise.