A few years ago I naively sent off a book treatment to a few small publishing houses and received the usual wad of “bugger off” letters, however one person took interest in an idea I had and asked me to read a few of their spin-off Final Destination novels. This I did, revised my idea, and eagerly awaited the outcome of a ‘pitch meeting’. Silence. More silence. Apologies. We’ve lost the contract, no more books. Yeah, ’twas a brush-off. But, y’know, live and learn…and to be honest, the four books I read weren’t all that, as you may see… 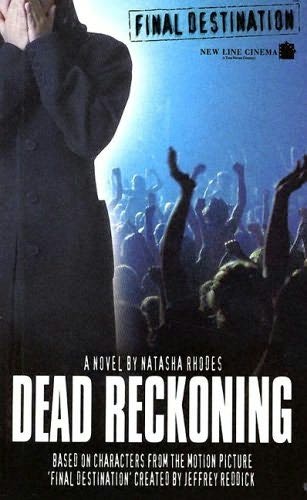 The singer of a rock band has a premonition that the club she and her group are playing in will collapse on top of the crowed, squashing the lot of them. She flips out and several individuals scarper in time to see it come true.

Understandably pissed off, Death comes-a-callin’ on each survivor’s door as everyday items conspire their downfall. One is crushed by an elevator, another’s motorcycle explodes, there’s a fatal spider bite, someone is sliced by a falling sign blah, blah, blah.

Here, lead character Jess consults a psychic for advice, which is new, and has a chapter-long nightmare about death being a bridge. It drags.

Well enough written to pass a few lunch breaks and there’s no coyness about violence, sex or swearing but looking at a series that trades on visual spectacle and shock, the book form doesn’t quite work… 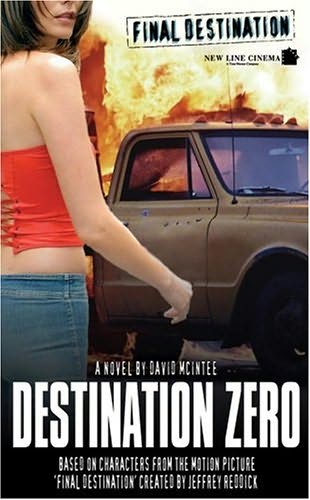 A woman has a vision of a terrorist bomb on the subway and causes a commotion, which prevents a few other people going through the turnstiles, thus saving them for now, thus lining them up for gruesome deaths-a-plenty later on.

In this book, which was the best of the four by far, the heroine (Patty, I think) and her boyfriend visit the same psychic as the first novel and investigate their plight, uncovering an ancestor of Patty’s who, in 1888, had a premonition of her own that she thwarted, condemning the survivors to grim demises and something about Jack the Ripper.

There’s also some cops (I think) with some insider knowledge, who detail older cases of bizarre deaths, how planes that crash are always under-booked and stuff. A nice, interesting element to add.

In the present, people are chopped in two by falling glass, drowned in flash floods, decapitated by hubcaps and – get this – impaled by flying CDs! However, this was easily the best of the bunch. 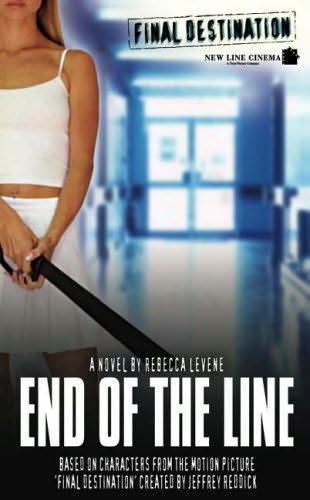 END OF THE LINE

One of the Americans has a premonition – again? yawn – that there’ll be a subway crash which will kill them all, so they, their aged guide and an old man escape in time. There’s also a medical intern who knows when people are going to die after a near-death experience of her own and she’s being stalked by the Mafia!

The group begin to DIE! DIE! DIE! Interestingly, one of the deaths was Xeroxed for The Final Destination (clue: the hospital and the over-filled bath). One guy gets flipped through the air and impaled on the antlers of a fucking live stag!! Two more are impaled on an umbrella display and another is done in when a flying chainsaw wraps itself around a lamppost, flying in ever-decreasing circles, sawing the victim in pieces upon each revolution. Yes, it was still running while it went round and around…

There was an okay twist thrown in but the death set-ups were so ridiculous I assumed Rebecca Levene was possibly a pseudonym for a group of 12-year-old boys ramped up on sherbert and Dr Pepper. 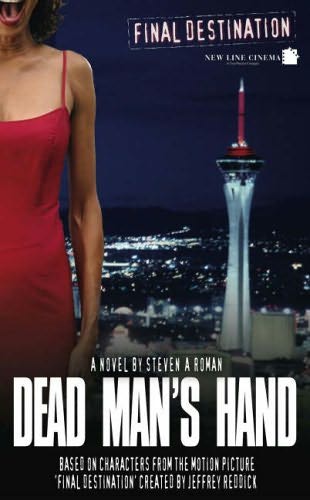 By Steven A. Roman

If the demises in End of the Line weren’t bad enough, Dead Man’s Hand takes a whopping half the book before we even reach the “opening” disaster. Ally is in Vegas with her on/off boyfriend, who she has married on a drunken whim and now they’re out of cash.

After we meet all the other characters, learn about their lives and Ally and new hubby bitch and moan at one another, we wait for the accident. And wait. And wait. Eventually, it comes, a neat little 70’s disaster movie type gag with an external scenic elevator shearing off the side of a hotel, killing all who tumble out and several on the pavement.

One hysterical outburst later, Ally, hubby and about three or four others are temporarily saved and later done in by electricity, broken signs and AIDS. Yes, AIDS is the final “joke” that Roman springs on us in what’s clearly something he wrote over a weekend and easily the worst of the lot.

So, does it work? Well, yes and no. The whole premise of the Final Destination series is gold, with no end to the possibilities of working stories for it and books (should) always allow for better character exploration and thoughtful reflection. And yet, the authors try so hard to make their leads ‘edgy’ that they largely become unlikeable walking cliches: Jess in Dead Reckoning is a klepto-Emo; Ally just bitches her way through Dead Man’s Hand and the bro-sis duo in End of the Line are as cheery as a raincloud.

Unfortunately, both this series and the films still shy away from investigating what unseen force bestows these premonitions upon the leads, who aren’t already psychic: Is it the antithesis of Death? Is it Life? Is Life trying to help them survive? Then there’s the fact that horror movies are usually a visual experience and that can’t be transferred to the page effectively – horror books are usually far more psychological affairs. You can’t insert stingers and ejector-seat scares on paper.

There are two or three later entries (plus novelizations of the films) but after Dead Man’s Hand I had to quit. I wouldn’t wholly recommend these books; they’re written to a strict formula and too derivative of the filmic versions, which, as we know, became progressively lame. Shamage.