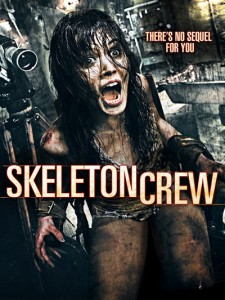 “There’s no sequel for you.”

Dire-logue: “Somehow we’re inside a film – a horror film. That’s why things have gone like they have.”

By my recollection, this is the first slasher flick to come out of Finland – land of computers, logs and Lordi. I didn’t know this going in. In fact for some reason I thought it was going to be set on an oil rig. Imagine my disappointment surprise glee lack of any real reaction when I figured out it was set in an abandoned mental asylum…

After the longest ever opening scene, in which a couple survive a car crash and seek help at said institution – we’re talking about 25 minutes or so where about three significant things occur, the rest is just the girl walking very slowly up and down corridors – someone yells “cut!” Hark, it’s another horror film about the making of a horror film.

Scream 3, Cut, Return to Horror High, Slaughter Studios, Scared, Urban Legends: Final Cut… This has been done so many times. What can they possibly do any different? Answer: be in Finland. End.

The film, directed by a Brit-wannabe Hollywood player (who says he wants the film to be the next Saw or Hostel), is called Silent Creek, about a true case where a doctor was killing patients and filming the deaths. Slowly – very slowly – director dude becomes obsessed with snuff films after the crew locate a hidden room with previously unfound reels living in it and decides that his film requires a change of tone.

While most European slasher films tend to add something culturally distracting into the mix, Skeleton Crew merely apes its American contemporaries. Nothing unexpected happens unless you count the sound guy being inexplicably frazzled by a lighting rig and an ending that really makes no sense. What’s left is token lesbianism (why the hell is it now in every DTV film?), seen-‘em-all-before slayings and clunky dire-logue. The title of this post translates as “doesn’t he know the film is total crap?” which is what frazzled-sound guy mutters to a buddy early on.

Before his death, sound guy opts out of following the others to safety once the killing has been discovered. Does he vacate? No. He goes to the kitchen and gets drunk, handily debilitating himself in time for the killer’s arrival. And where do the other cast members go? Where did the mental patient and the hulking nurse from the prologue vanish to?

I wanted to find some merit in Skeleton Crew beyond it’s acceptable production values but I’m getting a little pissed with all this same-old hat. While it’s not a horrid film there’s simply nothing remotely original about it beyond it’s geographical origin. Cold Prey may have had a standard plot but it worked its arse off to squeeze every little bit of tension out of it. Skeleton Crew is just cheap and lazy, which is effectively worse than being crap but endearing. 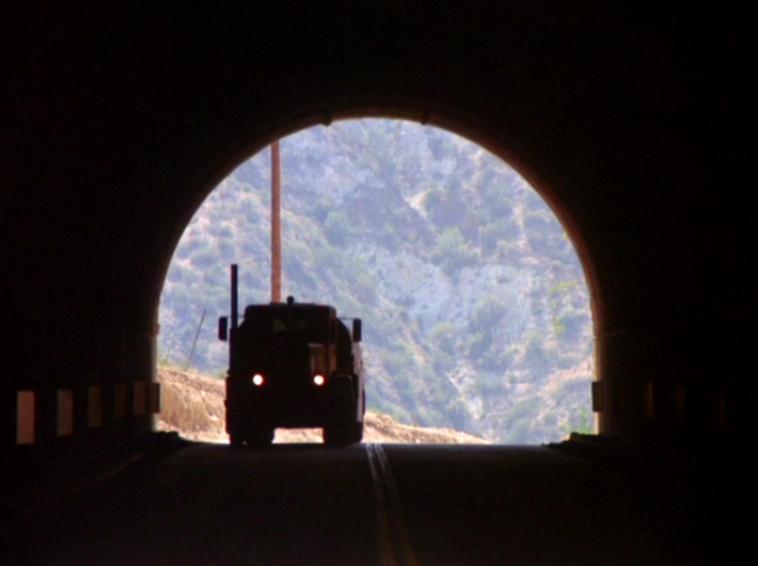 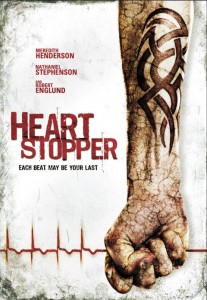 “Each beat may be your last.”

Dire-logue: “Get back here you Christ-infected bitch! When I’m inside you I’ll make you hell’s slut!”

Check out that Dire-logue! This film gains 75% of its stars from that alone.

The execution by electric chair of psychopathic killer Jonathan Chambers (Binkley) coincides with the suicide attempt of depressed high-schooler Sara (Henderson), whom everyone is calling a slut for the usual schoolastic reasons. i.e. none.

Chambers’ corpse and an injured Sara are both taken to a dilapidated hospital in the same ambulance after it nearly runs Sara over, where the loon is unaccountably resurrected and begins a heart-gouging kill spree in the hunt for Sara, whose body he needs to be reborn into. Or something. 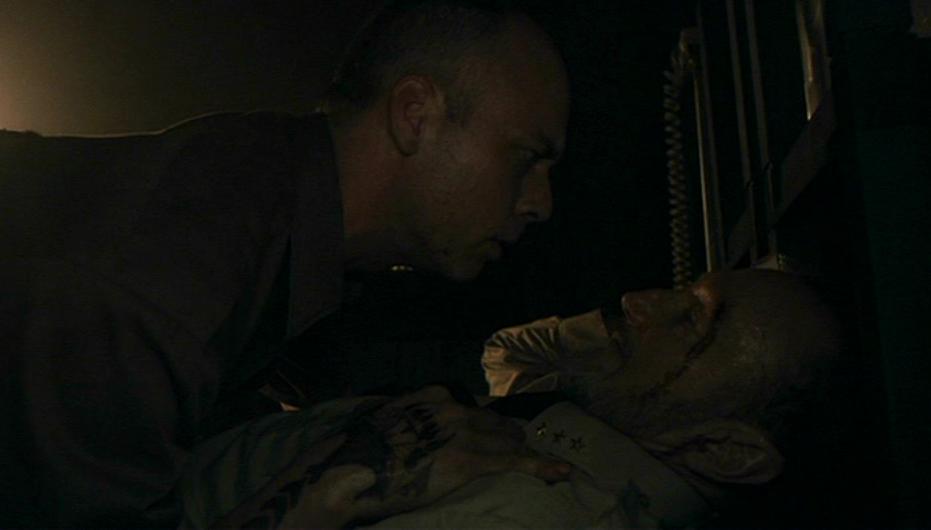 Robert Englund appears as the arresting sheriff but doesn’t make it far through the film – well, enough to appear on the DVD box as if he’s the star. Mucho killage ensues while Sara’s mom (Lori Hallier from My Bloody Valentine) visits and gives her daughter sod-all sympathy.

Alas, a big body count does not a good film make and at least two thirds of the film are made up of the whittled down group of survivors hobbling up and down corridors, looking for hiding places, and performing a fucking blood transfusion in the dark with the aide of one nurse. Sara and Chambers eventually face off, there’s a handy tornado and a final scream moment that neither confirms nor denies any ongoing threat. 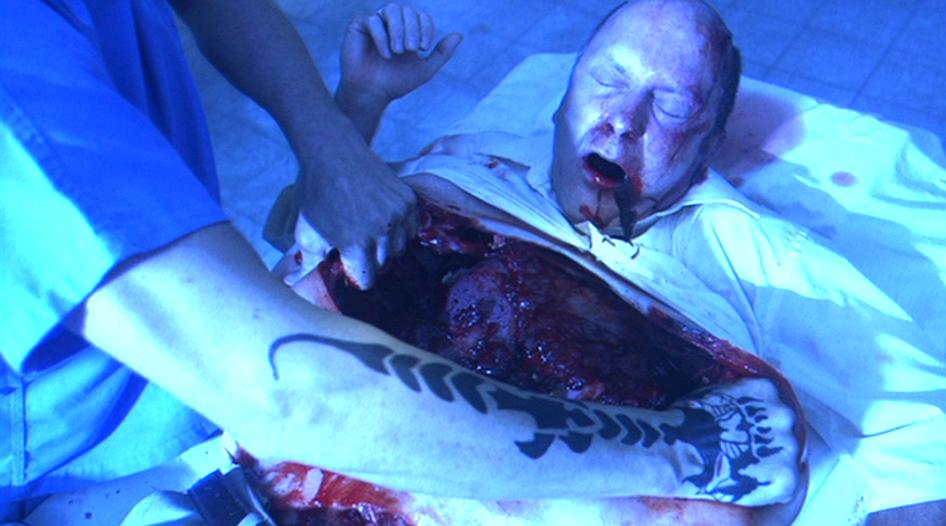 Plenty of arterial spray on show, including an operating theatre massacre where Chambers manages to do in half a dozen people in about two minutes. It’s one of those stupid scenes where there are approximately seven or eight people who could gang up on the lone killer and instead just cower next to small pieces of furniture instead.

The seriousness with which everything is played is what stalls the motor at the end.

Blurbs-of-Robert Englund: 8 appearances as Freddy aside, he can also be seen in Behind the Mask: The Rise of Leslie Vernon, Hatchet, The Phantom of the Opera (1989) and Urban Legend.

When a subtle title WILL do, but inadvertently sums up the quality of the film as a side-effect… 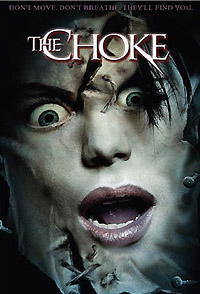 “This is not how rock stars die.”

Dire-logue: “Why do you have to be so obsessed with death? Why can’t you be fascinated with kittens or something?”

So we meet punk rock band The Choke, who are on the brink of a split as the pretty-boy lead singer and the guitarist conspire to break away to pursue their own record deal. On the night of their final gig together at Club 905 – more of a warehouse than a bar – they and a handful of hangers-on find themselves locked inside and up for the chop as a mystery killer knocks them off in ‘ironic’ ways, like a drumstick in the eye or the stupid goth-girl (who’s name is London – what???) being hacked by a spike-studded bass.

The script panders to a cookie-cutter treatment of its own origins; this has to be the first film in a long time where the final girl is a virgin and it’s easy to pick who’ll live and who’ll be bludgeoned to death with a microphone stand. Worse still, the film plods along at an excruciatingly slow pace with a rinse and repeat approach that sees characters suggesting they all stick together only to separate moments later! The killer is eventually revealed, along with their motive, in a fashion so boring that you’ll likely not even notice it happen.

While it’s nicely made (albeit shot like nothing more than a 90 minute music video), it’s just so terribly pointless that it chokes to death on its own worthlessness. Maybe watch it on a double bill with Dead Girls for more reasons to avoid shite-rock-rooted slasher films or endorsements for suicide.

When a subtle title just won’t cut it… 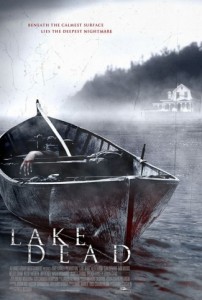 “Beneath the calmest surface lies the deepest nightmare.”

A trio of sisters, Brielle, Kelly and Sam (the latter is adopted), inherit a rundown lakeside motel after the grisly death of a grandpa they never knew they had. The vulgar Sam goes ahead to check it out and is attacked by a couple of inbreds who skewer her ankles together with a steel pole, weight her and toss her into the lake. Their surname is Lake too, and they now have a place by a lake! Isn’t that the coolest, most coincidentally amazing plot device y’ever did encounter?

A couple of days later, her goody-goody siblings arrive with a gaggle of friends in tow, all of whom serve no purpose but to have sex with each other and (if female) be raped and then slaughtered, bar Brielle’s hunky boy-toy Ben. The surviving trio soon learn that the killers are all part of their family remove and now they want the sisters back home with the happy clan to continue the lineage. 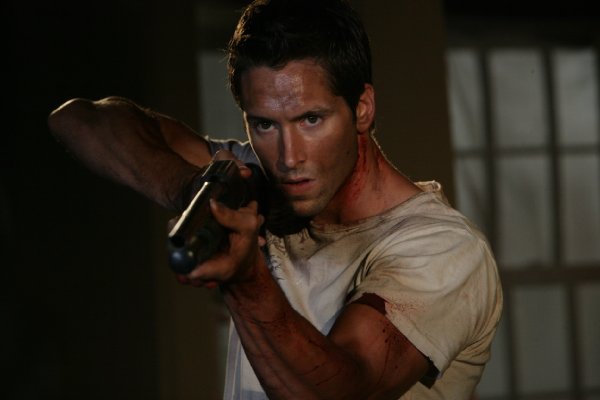 Crooked cops, loon inbred brothers (called Kane and Abel – groan) friendly old grannies who turn out to be psychos… we’ve seen it all before and a squillion times better in the Texas Chainsaw remakes. Lake Dead only succeeds in establishing itself as an ugly pretender – a runt of a film, much like the homicidal brothers in the film. All of the pretty young girls are tortured and raped while the guys are far less in number and done away with quickly or off-screen. The requisite teen sex-a-thon sees the girl buck naked while the guy retains all his clothes!

Additionally, there are some really stupid scenes to stare open-mouthed at: one character dives into the lake and swims directly under a dead body suspended beneath the surface but completely fails to notice it’s there and later, when running from the killers demands a breather, the fleeing victims decide to sit in the middle of the road and wait. Look, there’s a huge, thick forest to hide in, just inches away!

Weight this, toss it in the lake and pray it never floats topside.

Blurb-of-interest: Kelsey Wedeen was in Detour.