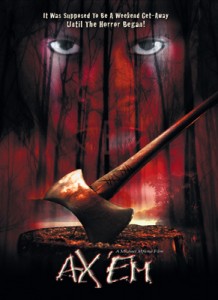 “It was supposed to be a weekend get-away until the horror began.”

Often cited as the worst horror film ever, possibly worst film ever, Ax ‘Em was shot a full ten years before it was finally given a DVD release in 2002. Why this was done is as big a mystery as the events that occur in the film itself. To clue you in to my level, what follows is the title card information at the start – verbatim:

On a cold winter night, in 1990, Mr. Mason, a mean and cruel Towns man, left his job for Home. After arriving home, He took a shotgun And killed his wife and Kids. This is mean man Killed himself. When the police arrived they only Found the bodies of wife, Daughter and younger son. His mentally ill son Harry Was not ever found. Legend has it, he will return In 13 years to revenge his family deaths.

So there you have it, that’s the backstory. It doesn’t seem to matter as whomever the killer is supposed to be, he’s now a middleaged man who grunts a lot. A large group of young African American people go to a house for the weekend. Once there, they eat and find the body of some white guy, then they all run into the forest, some of them run back to the house, some of them die.

It’s futile to try and put into words what watching Ax ‘Em is like. Fortunately, I watched the whole thing on YouTube in 8 segments, all of which presented the film in its grainy, inaudible glory, beginning with some totally unrelated scenes of street dancing and a comic, possibly material that was already on the video cassette supremely untalented director Mfume used to record this film on.

Remembering it is giving me a headache, so here are some funny-slash-unbelievable things that occurred:

Oh God, I’m too depressed to go on. Go to the YouTube link if you must, but heed my words. Someone ax me, please!

tagged with hair don'ts, I want to die, slasher, what the hell!?