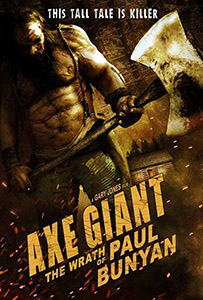 “This tall tale is killer.”

A.k.a. Axe Giant: The Wrath of Paul Bunyan

Laughter Lines: “The courts have given you this one last chance to get your shit together, or your shit will get pushed in…in prison!”

Those of us outside the US who aren’t familiar with Paul Bunyan, Wikipedia tells us that he’s a legendary character of folklore – a giant man at the forefront of the lumberjack culture. Did he exist? The evidence seems to suggest not, but for the sake of low rent slasher movies, no American icon is safe from exploitation. See also Uncle Sam and/or Urban Legends: Bloody Mary.

This unmistakably awful production begins in 1894 with a group of loggers found axed to pieces by their leader, who is then assaulted by a deformed plaid-shirt wearing loon who looks like one of the mutants from the cheaper Wrong Turn sequels, who pushes him into a buzzsaw. 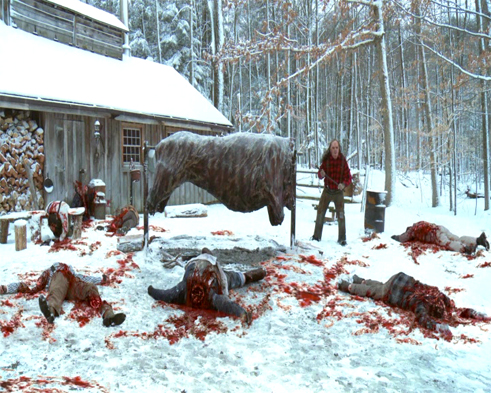 118 years later, a group of young offenders are packed off to the woods of Minnesota (though it looks a lot like California) on a program that allows them to avoid doing time (see Laughter Lines), led by amusingly macho Sergeant Hoke (Downey) and touchy-feely social worker “Ms K” (I never did get her name). The teens are known as STUMPS, or “Stupid Teenagers Under My Protection” as Hoke puts it, and number among them a drug dealer, hacker, and dangerous driver.

During a hike, one of the obnoxious ones decides to take home a souvenir in the shape of a horn from a skeletal ox carcass. This is later revealed to be from the grave of Paul Bunyan’s only ‘friend’, Babe the Blue Ox. Again, if you’re unfamiliar with the story, it’s going to mean fuck all to you. But forest hermit, Joe Estevez, is on hand later to tell us that Paul Bunyan is the Axe Giant, left in a cave after his logger massacre blah, blah, blah, survived, blah, blah, grew bigger and bigger and now is a giant. Like, a TOTAL giant. 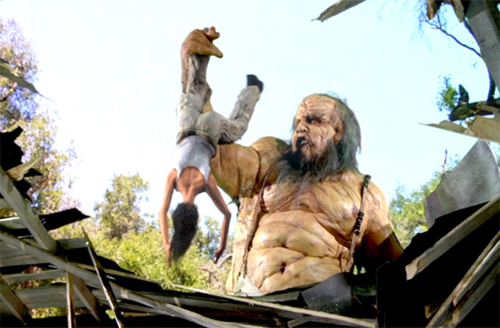 Once Bunyan appears, he starts to decimate the campers with his anchor-sized axe, traps them in a cabin and makes repeated visits to kill them until the usual few are left to drive away at about 10m.p.h. before they’re eventually rescued by a bunch of NRA-type nutballs.

Strangely, Axe Giant starts out quite well, with some fun to be found at Sgt. Hoke’s expense, and nice forest scenery, it’s when the Victor Crowley-a-like Bunyan enters proceedings that craptastic CGI effects become too poor to handle, characters become really stupid (throwing a small stick at a 20-foot tall maniac is NOT going to defeat him), and extras look right at the camera.

Filmicly dreadful, but there’s fun to be had if you can switch off your logic receptors and pretend computer generated effects are still in their infancy. 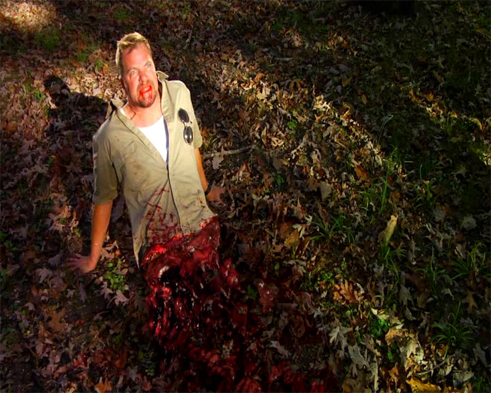 Blurbs-of-interest: Joe Estevez is also in Sigma Die!, The Catcher and Scar; Tom Downey was also in Jolly Roger: Massacre at Cutter’s Cove, which was also directed by Gary Jones, as was Boogeyman 3; Chris Hahn was in ClownTown.

tagged with get your own ideas!, gore o'clock, Nu-di-ty, slasher, slasher films that aren't supposed to be funny but are funny, who finances this crap!?