Son, you’ll be a bachelor boy until your dying day… FYI, that’s today. 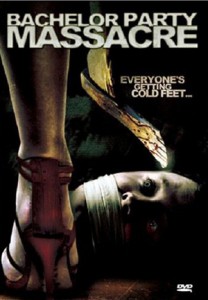 Dire-logue: “Are you fucking letting that bitch stab you?”

Make no mistake, any film called Bachelor Party Massacre is going to be naff. But, surprisingly, things aren’t quite as bad as they probably should be…

Four buddy boys gather together to send their friend Addison off in style. In actuality, this means sitting around in a dingy, abandoned bar, drinking and letching over a couple of strippers they called in. Meanwhile, a poncho-clad schizo chick goes about murdering those who stray from the pack.

Why does she do this? No particular reason. She’s your cookie-cutter escaped loon, nothing more. No feminist subtext to her hobby. Boooo…

While the film is dirt cheap and not especially engaging, there’s an appealing undercurrent of enthusiasm that keeps things ticking along okay, although it runs about ten minutes too long and wouldn’t it have been good if there were a few more guys at the party? How unpopular is Addison?

Eventually, the groom’s fiance and nagging sister-in-law turn up to make sure things haven’t gotten out of hand and the real slashin’ begins, accompanied by some almost funny one-liners. Bride-to-be Lisa finally takes charge and manages to find a sword in the bar (!) and dukes it out with history’s least threatening killer, whom three people run away from as she totters drowsily towards them with only a knife…

Bother if you will, maybe we can prompt “Schumacker Halpern Overdrive” to make a sequel: Bachelor Party Massacre II: The Wedding’s Off!

tagged with grrr men!, Nu-di-ty, slasher, what the hell!?, who finances this crap!?