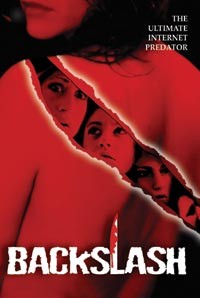 Dire-logue: “I’m a double major: computer science and history… My virginity is not a choice.”

I’m in a generous mood. On any other day this crappy film would scrape a solitary star because it’s not just bad in a cheap way, it makes almost no sense, has tons of bizarre plot holes and is atrociously acted. So why two stars instead of one? We’ll get to that…

A trio of college boys are making a sleazy camcorder slasher flick called Death Blood at their small town community college when the bitchy actress throws a strop when she gets a call from an LA agent that interrupts a scene. She storms off and gets a knife in the back from a loon dressed, of course, in the same getup at the movie killer.

The murder makes the news, as does the fact that the girl was featured on the school’s Hottest Chicks website, run by the sleazy filmmaker Ledo, who has no intentions of taking it down, even after the replacement actress winds up dead, her liver removed as per the first victim, her last movements also including a call from an LA agent.

Ledo begins talking up bimbette Amie to star in the film and features both her and brainiac Martha on the Hottest Chicks site and the girls fear they will be the killer’s next targets. As polar opposites, they bicker and finally work together to try and find out who the killer is.

It could be Martha’s dorky best friend Willie, who carries a torch for her but hates the airhead girls… Or police academy failure, Mr Bates, the campus security officer… What about the FBI agent-turned-teacher of criminology?

Things get complicated two thirds of the way through as it appears the killer murders one of the film dorks but spares his actress, who is possibly Amie’s sister Emily. I dunno, it was confusing and nobody ever mentions it again. Who was the victim in the chair in Martha’s house who disappeared?

Back Slash earns its second star by altering the expected turn of events and having Martha and Amie act as sort of dual final girls: one smart nerdy feminist and a semi-literate wannabe actress who’ll have sex with anyone. If nothing more, it lends to some amusing Dire-logue:

– “What is it with serial killers using all three names: John Wayne Gacy, John Wilkes Booth, Jack the Ripper?”

– “You’re a pathetic loser and your piece of shit movie’s going straight to cable!”

Once the killer is revealed – and contrary to the film’s crudness, it’s not that obvious – he attempts to rob Martha of her well-publicised virginity and she manages to slice his cock off. Now, most men would freak out at this but our killer carries on fighting with her and only seems bothered when Martha drops the severed member in the garbage disposal.

I’m obviously delirious, the film honestly sucks. I don’t know what I’m doing anymore. Argh. I didn’t mind it for reasons unknown but you probably will so when you watch it and hate it, don’t say I didn’t disclaim this! ‘Cos I did. Right here. Right now.