Be careful what you fish for

Vegan Voorhees is going to take a little step outside of the slasher movies only hoop into the dangerous world of… OTHER HORROR MOVIES! Well, killer fish movies – but only for a minute! Promise!! 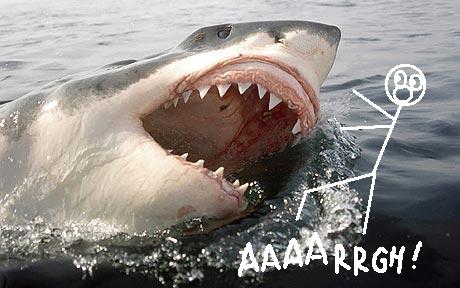 Being a child fan of Jaws, I’ve always liked me some fish-what-bite-back movies. I don’t really like eating fish but they get a raw deal (‘specially if it’s sushi – ho ho ho) so sometimes it’s nice to see them get their own back on people. 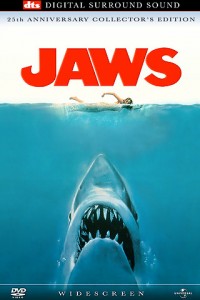 The Top Dog of killer fish movies, the original movie has not only never been bettered but it’s rare to find anything that comes within a mile of it. That said, for years I advocated Jaws 2 as my favourite of the bunch – thanks largely in part to A). the water-skiing bit, B). Phantom-of-the-Opera shark and C). the dumb group of teens picked off by the shark. Though not nearly enough of them got chomped.

Jaws III and The Revenge were comparably naff but I still like. I can clearly remember cereal boxes with 3D glasses and little Jaws comic strips on the back; Jaws 2 crisps (pickled onion) and attempting to read and understand the complex plottings of the Jaws: The Revenge novel, aged eight.

But enough about these films – we’ve all seen them, we know they started well and ended up with a fish able to strategize an intricate revenge scheme, but what of the hoards of pretenders? 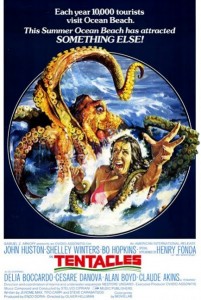 A giant octopus eats people at a small Californian beach resort. It sounds awesome and begins fittingly awesomely with the ‘pus snatching a child from a pushchair by the water! Harsh. Some spooky scenes ensue but before long, protracted scenes of scuba diving only serve as a reminder that nothing is more boring than protracted scenes of scuba diving.

The ‘pus eventually attacks a sailing regatta, eats another child and Shelley Winters wears a giant sombrero. At the end, a widowed guy sets two killer whales on the poor creature. Tentacles should’ve been so much more. It should’ve lived up to that AWESOME artwork. Someone remake it. 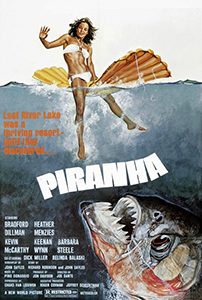 Joe Dante directed this playful spoof on Jaws and it swims with ease into second best killer fish film. Despite being a total satire-fest, Piranha is actually quite sad in points: the nice summer camp counsellor (Dante regular Belinda Balaski) falling victim to the ever-trilling fishies is a borderline upsetting moment rare in horror, letalone low-rent killer fish horror.

The film was followed by a bizarre sequel in 1981, directed by James Cameron of all people, in which the fish had developed freakin’ WINGS and could hide out inside corpses long enough to flutter out at close by nurses.

Roger Corman produced a real cheap looking TV remake in 1995, which featured a chick from Baywatch and Soleil Moon Frye and much of the same footage from the original. Fair to say it sucked. 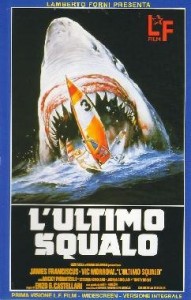 Universal successfully sued the producers of The Last Shark (a.k.a. Great White, L’ultimo Squalo) for plagiarism and the film was shut down after only a couple of weeks in theaters in 1980, which is a bit of a shame as, despite its shameless pilfering, it’s not the worst killer shark film around.

A rampaging Great White eats windsurfers, boaters and endless people who try and kill it. Borrowed scenes include midnight skinny dipping, the shark crashing another regatta, eating a helicopter, tearing a jetty away and characters which are virtually third-generation Xeroxes of Quint and Brody. The shark resembles a thirtieth-generation copy of a polystyrene junior school art project that more floats than swims.

Proving he was a versatile writer, Peter Benchley penned the novel in which a giant squid terrorises a small coastal community, which was made into a mini-series a few years later. Sounds like Jaws? It virtually is. Shot in Australia with a load of cast members from Neighbours or Home and Away, I can’t remember much of it now, which is possibly a merciful state of mind to be in. 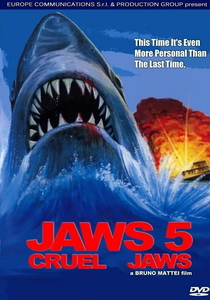 Love that tagline: “This time it’s even more personal than the last time.”

I encourage you ALL to find a copy of this hilarious patchwork effort that unapologetically steals footage from the Jaws movies and The Last Shark. Another hungry fish – this time trained (!?) by the navy – comes to town to eat folk, the mafia are involved, the marine biologist tells everyone: “Only one species of shark is capable of this…the TIGER SHARK!”

But all the footage is of Great Whites.

There’s a sensational scene when a girl confined to a wheelchair begins rolling down a pier and plunges into the water and we clearly see her legs begin to kick. A girl squeals “I wanna dance!” when she’s already dancing. The main guy looks like Hulk Hogan and the shark is somehow destroyed three times at the end. It’s amazing.

Literally ALL scenes with the shark are lifted from other movies and it had the nerve to try and pass itself off as Jaws 5!!! It’s at least more fun to watch than Jaws: The Revenge though. 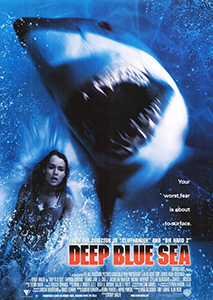 Saffron Burrows is a scientist. Ha ha ha! She and Stellan Skarsgaard have been experimenting on Mako sharks to reverse the effects of Alzheimer’s. Ha ha ha! The side effect is that the sharks’ brains swell and they get smarter. Ha h- what?

Said clever fishies rebel against the scientists, crash a rescue helicopter and start to sink the out-at-sea platform, pitting the group of survivors against them as they try to reach the surface.

LL Cool J is a religious chef. Thomas Jane swaggers around, throwing himself all over the show as the macho hero and Burrows plays it all low-rent Ripley, her character so detested by focus groups that they re-shot the end to have her chomped by one of the sharks.

The first Shark Attack movie in ’99 could send a can of Red Bull to sleep. The second one had roaring Great Whites and a couple of decent laughs but Shark Attack 3 is where it’s at: a giant million-foot prehistoric Megaladon shark comes out of a deep sea trench and eats things. There’s a school of regular GW’s around too, ready and waiting at the bottom of waterslides, eating parasailers and stuff…

As if this were not wacky enough, John Barrowman camps it up as a scientist who turns to his female companion (who played a different role in the first film, evidently hoping nobody saw it or fell asleep and didn’t notice) seconds after she mourns the loss of a friend and says; “What do you say I take you home and you let me eat your pussy?”

Allegedly he was trying to make the actress laugh but it got cut into the film anyhow. See it! 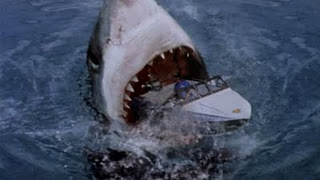 A subtle Australian export reportedly based on true events. Five people head out on a yacht. The yacht capsizes. Four of them opt to try and swim to land. A shark eventually catches up and begins attacking them.

Open Water has a lot to answer for (not least of all its horrible sequel, Adrift), but The Reef is actually pretty good. Though you could only watch it the once really. Some decent tension mounts in one of those what-would-you-do situation horrors Australia is good at. 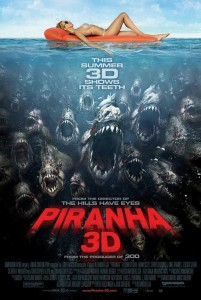 Alexandre Aja helmed this in-name-only remake (which would’ve been better off as a sequel), which trades story and character for gore and tits. Lots of tits. So many in fact that I wondered if the film had been part-funded by a Naturist Society.

Dame Elisabeth of Shue tries her hardest to fit things together as the local sheriff who sees Spring Break literally savaged by a massive school of prehistoric piranha freed by an underwater earthquake.

It’s a disappointingly shallow affair but good for squishy demises and 13-year-old boys who want to ogle silicone boobs but the whole thing carries a disturbing undercurrent of misogyny in places, which sees countless pretty girls chewed into chunks only after they’ve ripped their tops off.

The more family friendly alternative to Piranha, college kids take a vacation at their rich friend’s lakehouse and soon discover it’s teeming with various species of dangerous sharks put there by a group of money-hungry rednecks who want to sell footage of real life shark attacks to the Discovery Channel. Seriously.

No reason is given for the fishes aggression and I was more sad that the teens captured and killed a cute Hammerhead than when any of them died. It’s funny how the lead guy is supposed to be the ultimate nerd but is seen comfortably shirtless with the body of a Jersey Shore extra. The dog is the only character who matters and is the one to save the day when it counts. 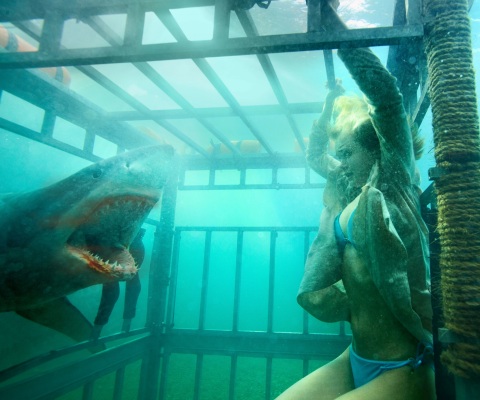 Other ponds to paddle in: 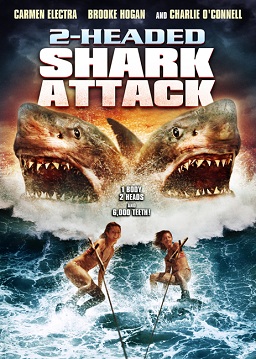 Can I burst into tears now or do I have to actually see it first?

tagged with Euro-horror, Nu-di-ty, rip-off central, sequel city, the 80s, what the hell!?, who finances this crap!?