A love letter from Glen Echo 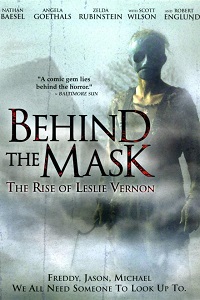 BEHIND THE MASK: THE RISE OF LESLIE VERNON

“Freddy, Jason, Michael. We all need someone to look up to.”

Laughter Lines: “Act normal… it’s the opposite of what you’re doing right now.”

Seen by hardly anybody upon its theatrical release, this genial little film follows a three-person documentary team who have been granted access to follow budding psycho killer Leslie Vernon in the weeks leading up to his big night of teen-slayage at an old farm in the Anywhere USA town of Glen Echo.

Taylor (Goethals, who was one of Macaulay Culkin’s big sisters in Home Alone) is the reporter, while Doug and Todd handle the visual and audio. Leading in with nods to the infamous murder sprees in Crystal Lake, NJ, Haddonfield, IL, and Springwood, OH, the filmmakers meet an amiable, chatty, handsome chap in Leslie, who is more than happy to have them document his preparation, including copious amounts of cardio to be able to keep up with fleeing teens, rigging the old farmhouse for the power to trip out, windows that won’t open, tree branches pre-sawn to prevent escape, etc. 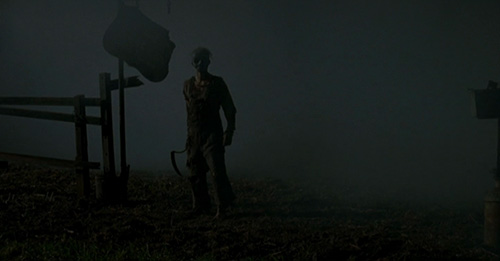 Leslie introduces Taylor to his mentor, retired psycho Eugene and his perky wife, and takes the crew along to explain how he has chosen his ‘survivor girl’, virginal bookworm Kelly, who intends to go to the party at the old farm with some sexy young friends. Leslie goes so far as to comment on the type of victims he prefers – stoners who are usually too disoriented to run at any speed are “good for getting your numbers up”. The entire film barely misses a trick.

In addition to selecting his final girl, Leslie is thrilled to attract the attention of his own ‘Ahab’, Loomis-type psychiatrist Doc Halloran, a very dry Robert Englund, who is clearly relishing every second. 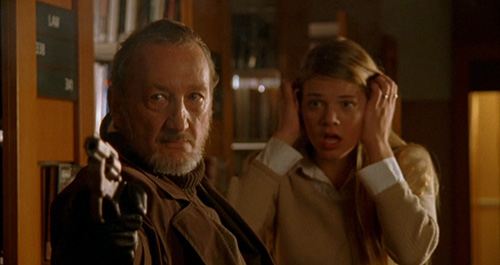 Elsewhere, Leslie guides Taylor around the rest of the farm, taking time to explain that, all being well, Kelly should eventually find the tool shed and arm herself with a big, hard axe: “She’s arming herself… with cock,” he says, stepping into psychoanalysis of the phallic weaponry, then the birth canal-like road to salvation when she comes through the trees of the orchard for their final showdown.

As the time draws nigh, Leslie becomes concerned that his companions might thwart his plans, accusing them of looking like they can’t just stand by and let it happen, which is when Behind the Mask switches from being a documentary to being a slasher film, forcing Taylor, Doug, and Todd into the narrative and putting them in harms way along with the gaggle of teens, who may not all be as cut n’ dried as Leslie led Taylor to believe… 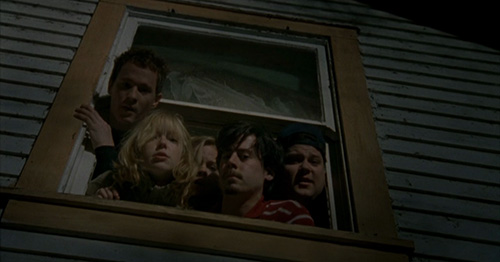 Here, several critics accused the film of falling victim to the tropes it previously parodied, but up until this juncture, Glosserman and Stieve never opted to decry the rules of the genre, merely explain them in a comical way. Whereas Scary Movie and its various contemporaries could reasonably be accused of looking down on slasher films in a snarky way, Behind the Mask is merely looking at them, admiring them even, never throwing any accusations their way.

A few budgetary restrictions have an impact here and there, and it’s never clear what happens to Zelda Rubinstein’s character, but these are minimal flaws at best, and they don’t cost the film much. As it is, a criminally neglected gem, certainly one of the best slasher flicks of the 2000s and in need of the in-limbo sequel that’s been on the cards ever since the credits began to roll. This deserves an audience. A big one. 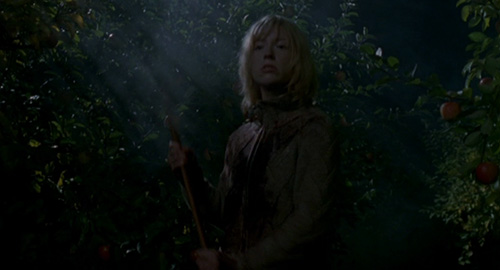 Blurbs-of-interest: Robert Englund appeared as Freddy Krueger in eight of the nine Nightmare on Elm Street movies, plus Hatchet, Heartstopper, The Phantom of the Opera, and Urban Legend; Kane Hodder is the homeowner at 1428 Elm Street; Zelda Rubinstein was in Wishcraft.