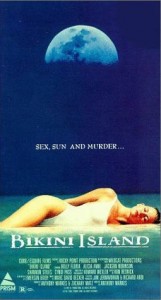 Bikini Island…where the moon is out during the day and the girl on the cover is in a one-piece swimsuit. How can it fail?

‘Based in part on a true story’, five swimsuit models duke it out for cover-star status and a $100,000 prize. Trouble is, somebody is expiring their modelling contacts earlier than expected. The pesky killer likes to do away with victims primarily with a fucking sink plunger to the face or, later on, a bow and arrow.

There’s more nudity and sex than there is horror in this translucent tat, a carbon copy of which was created by near on the same team and cast a year later in the slightly more watchable Last Dance - in which the killer had pretty much the same motive.

Here though, the fiend’s identity is thinly disguised by ‘suspicious’ zooms and the sound of a cello around various supporting characters, including a bitchy assistant and a freaky hotel custodian who appears to be the only member of staff.

It takes a good (read: not good) 40 minutes before the action takes flight, struggles, and ditches into the sea, culminating in the killer’s archery massacre in the last five minutes that ups the body count significantly before a short but amusing chase scene when the bimbo heroine confronts the killer but in the end I felt sorry only for the VW Camper Van which sails over a cliff edge.

Blurbs-of-interest: director Markes and actor Kelly Pool were involved with Last Dance; The director of Psycho Cop Returns had a small role.

tagged with Nu-di-ty, obvious identity of killer, slasher, slasher films that aren't supposed to be funny but are funny, who finances this crap!?