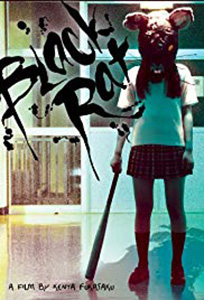 Strange little Japanese export starts with a half naked teenage guy staggering and crawling away from a masked loon down a corridor, across broken glass, and eventually finding himself trapped by a locked door. In comes the weapon. Extreme close up for a scream. Credits roll.

‘J-Horror’ reigned supreme throughout the 00s, with films about various cursed objects and places, making a generation afraid of tech, mirrors, and unlabelled video cassettes. Largely inferior American remakes cloned the sub-genre to shit and the freshness of The Ring and The Grudge was melted down into drek like One Missed Call and that cop-out re-do of The Eye (yes, the original was Chinese). Battle Royale, famed for it’s virtually unremakeable plot, fell out of the usual tramlines as it didn’t feature a supernatural element – and neither does Black Rat. 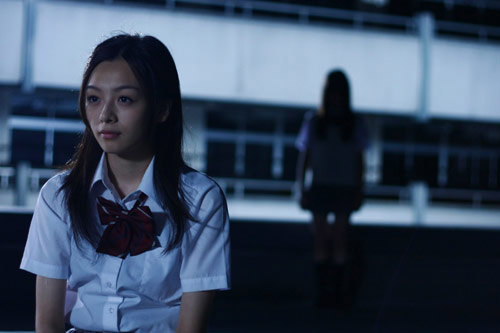 Through intermittent flashbacks, we learn about the suicide of smiley student Asuka, seven weeks ago (not ten years for once!) Despite well-translated subtitles though, I never really sussed out what the big mystery was: She recruited her six friends to learn a dance for some upcoming festival and made a black rat mask for it, which put off the others (again, not sure why, it looked decent enough). Some hints about boyfriend stealing, unrequited crushes, and general peer disapproval are sprinkled throughout.

The other six ‘Black Rats’ are invited by text “from Asuka” to classroom 3B at midnight – four of them show and encounter a masked girl who uses a flipchart pad to tell them vengeance is about to be served, and when the teen boy from the beginning staggers in and dies, they flee. The school is locked down, so the Black Rat menaces the kids one by one, challenging one to save a goal for his survival, and another to score over 100 points at karaoke… 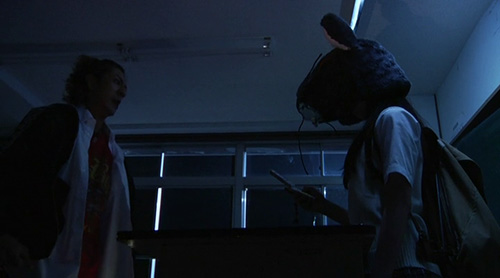 Good girl Misato is late and, unlike the others, immediately discerns that the girl in the mask is anyone but the ghost of her best friend, which leads Black Rat to the first of a few twisty revelations. The film has been playing us from the start and, yeah, it’s kinda clever, but it messes with the format to the point where it blurs who is responsible for what in an almost Bay of Blood-style way.

A ghost-free horror film from the Orient is a rarity, but South Korea is still unchallenged when it comes to manufacturing the best slasher pics from the region, but this is worth seeing for a quick peek into the conventions as seen from another cultural perspective.

tagged with death on campus, I know whatcha did!, J-horror, slasher