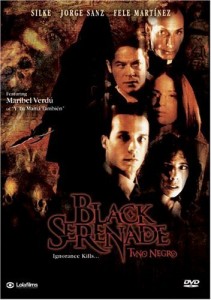 Dire-logue: “It was a question of survival: my dick or my life.”

The reverse of the DVD of Black Serenade details the general plot of students and death and then states that the heroine will “have to use her knowledge of Art History” to solve the mystery. Art History? What is this, the Dan Brown slasher flick? Heart sinks like stone.

In the actuality of actualness, this handsome looking Spanish film has more in common with Urban Legend than anything else, which, for me is a good thing. Beginning with ‘The Barrymore Trick’ of killing a pretty girl before the credits, we learn of a Spanish myth (which may or may not have been invented for the sake of the film) about The Dark Minstel (Tuno Negro), a kampus kruising killer who murders the poorest performing students at colleges across the country. And also newlyweds for reasons unclear. 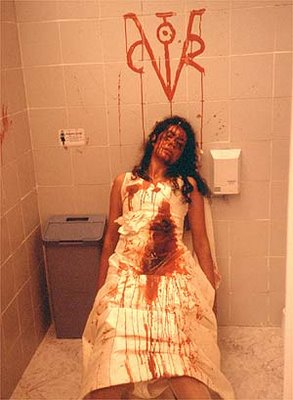 The yarn stems from the Minstels of the 1600s who played music to pay their education fees and, when more privileged students began getting in on the act, the original Minstels struck back and murdered them before being burned by the townspeople. This prompts the present day killer in their quest to rid the world of the failing students at Salamanca University…

Our prissy heroine Alex attracts the killer’s attention (beside being a brainiac) and her less academically gifted friends begin to fall victim to the loon, who dresses as a traditional Minstel, which conveniently fits in with the fratb0y-like students who appear at all manner of campus hootenanny’s to sing and strum banjos, then get drunk and have sex with girls.

A love triangle develops between Alex, a legend-obsessed cop Victor and I’ll-fuck-anyone-to-pass-my-exams Minstel Eduardo. At this point things became slow moving and confusing. The amount of time the film takes place over is not exactly clear and some murders seem to go totally unnoticed. Alex does indeed turn to Art History (zzzzz…) to piece the puzzle together. 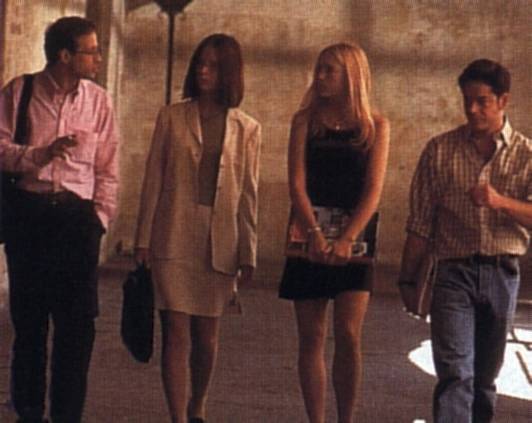 I was forced to take a module of Art History during my first semester at college and have retained approximately 0.00% of what I learnt. I’m not sure mixing high-end art theory with “low-end” stalk n’ slash chills is a winner. I’m defensive of slasher flicks so won’t be referring to them as low-end again but for the sake of accurate comparative analysis it’s the best way to make a point. This was a huge obstacle in Black Serenade, something other collegiate slashers managed to avoid: Urban Legend used a topic we’re all interested in; Ripper had the useful backdrop of criminology and most people know enough about biology so that Anatomy‘s med-students in peril didn’t confuse them. But 17th Century Art… Really?

Okay so the primary concern is the killin’. There’s a high enough body count to make the film interesting and the scene where Eduardo guides Alex and another of her admirers (called Trout…!?) around campus as the killer sends real-time video footage of him stalking his next intended victim to a computer is hair raising, but once the fiend is unmasked there are enough loose threads to sew a blanket out of. The killer’s identity is practically an impossible equation that even Alex could not solve. Maybe we’ll get a mathematical-slasher film to aide us next. Perhaps something was lost in translation or the guy or guyette typing the subs just got bored and decided to make it up (though I wish they’d stricken “c**t-struck” from the script when Victor is challenged about his devotion to Alex). I don’t know. I’ve seen the film twice now and was as confused the second time as I was the first.

Not a failure of a film but often vulnerable to the stalkings of a Dark Minstel all the same!

tagged with death on campus, Euro-horror, slasher, weird-ass twist, what the hell!?