The First Cut is the Crappest 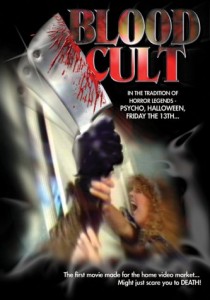 Dire-logue: “We do not need serial murderers on this campus.”

This film proudly states that it was the very first film made exclusively for home video. In real terms, it was the first time someone brandished a camcorder and squirted some ketchup at a wall while a wannabe starlet screamed in the background. All for less than $27,000!

As it is, Blood Cult is just another lame cash-in, that poses as a drama-documentary about a series of co-ed murders plaguing an Oklahoma college campus where the cleaver-toting killer steals random body parts and leaves behind small gold trinkets.

Aged local sheriff Ellis must try and figure out who’s behind it before the all-important elections. With the help of his librarian-slash-housemother daughter, Tina, and her repellent know-all boyfriend, our octogenarian hero discovers that evidence points in the direction of a cult made up of select locals who worship a DOG called Kaninus!

For the bad sound, sucky plotline, crappy acting and misogyny, there’s some cheesy recompense: the killer uses the decapitated head of one victim to beat her roommate with; severed fingers are found in a salad, and they had the audacity to call the sorority house where the first murder occurs Chi Omega!

The identity of the killer is also a surprise, although after the literal unmasking, the film ends without providing any further reference to the cult, its members or any what-happened-next material. The credits just roll. If you’re desperate enough to find out what happens, try the sequel, Revenge, for answers.

Obviously they had nothing better to do with another $27K. Give it to me! I could’ve left the camera on filming my lounge wall and provided a better 90 minutes’ entertainment.

Summary: the first shot on video film about a cult that worships dogs and some dodgy ketchup murders. You have been warned!

tagged with death on campus, get your own ideas!, I want to die, rip-off central, slasher, slasher films that aren't supposed to be funny but are funny, sorority, the 80s, what the hell!?, who finances this crap!?