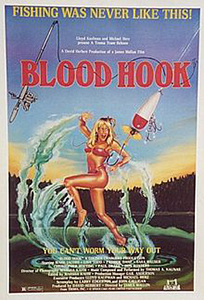 “Live bait… but not for long.”

Laughter Lines: “I will now proceed to blow the motherfucker away.”

This weird endearing Troma pic begins with a young boy witnessing the strange death of his grandfather at their Wisconsin lake house. Seventeen years later (finally not a multiple of five!), the grown up kid and four friends return to the house for the annual Muskie Madness fishing competition.

While some locals cheat and bicker about events from the past, a mystery maniac is reeling in human catch with a large treble-hook. As victims are picked seemingly randomly, nobody’s sure who it is or why… Plus there are no bodies so the local sheriff has to ignore the pleas for help from the teens: “My friend has just been killed and you’re filling out a form!”

Suspects include cranky old fishermen, paranoid ex-military Tucker & Dale type Evelyn, and possibly even one of the teens, who has a habit of acting strangely. Hmmm… If Scooby Doo has taught us anything, it’s not to go for the obvious red herring. Or red muskie.

Blood Hook is an odd experience in terms of slasher films, entrenched in local custom, much of it is played for comedy, with some funny lines (“if you feel comfortable killing me, that’s fine, I’m an adult, I understand!”) and amusingly eccentric characters, not to mention some of the worst of 80s fashion.

Acting ranges quite spectacularly from genre-common awful to surprisingly good, and the eventual motive behind the murders reaches new (entertaining) levels of desperate: Sound. The killer has a metal plate in his skull that causes him great pain when certain frequencies make it vibrate, thus driving him to kill.

Some of the many fashion crimes committed in Blood Hook

So, the teens and their new wave rock music, a fisherman with a klaxon, the temperamental cicada population all serve to drive him mad. Luckily, grown-up-hero-kid knows a lot about chords n’ shit so can figure it out!

Despite low production values, little in the way of grue, and its eccentricities, caught in the right mood, Blood Hook is a fun little time waster.

Blurb-of-interest: Lisa Todd was (much) later in Playback.