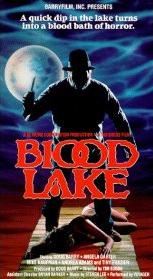 “A quick dip in the lake turns into a blood bath of horror.”

More regional shot-on-video shite that looks like its entire budget was used to hire a ski-boat that a sextet of teens (two of whom are younger siblings of about thirteen) play with during a weekend break on post-apocalyptic vacation area of choice, Cedar Lake, where they are menaced by a plodding, overweight Dom DeLuise look-a-like (bad hat included!), who’s pissed off because he wants the cabin to himself. Nothing happens for the first 45 minutes and, when it finally does, it’s all crap, backed with a dire thrash metal soundtrack and miniscule body count that spares most of the annoying cast. The bizarre final twist – credited to God – isn’t funny either. Gimme Crystal Lake any day. Bugger off, Blood Lake!

tagged with hair don'ts, slasher, the 80s, who finances this crap!?