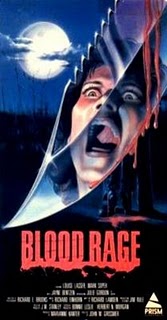 “Not all the evil is on Elm Street.”

A.k.a. Complex / Nightmare at Shadow Woods

For absolutely no valid reason, a young boy embeds an axe into the face of some guy at a drive-in in Jacksonville and blames it on his shocked identical twin, who lapses into a state of catatonia and is carted off to the funny farm.

Ten years later, the innocent brother escapes from the institute on Thanksgiving, coinciding with the twins’ mother announcing her engagement to her boyfriend, which prompts the other son to pick up the carving knives for a little more than slicing up the turkey, taking out the residents of their apartment complex and handily blaming bro.

Convoluted premise aside, things take off pretty quickly and the blade-swingin’ evil twin has sooned chopped, slashed or impaled most of the cast until only dippy virginal good girl Karen, some random baby, and Mom remain to witness to twins’ final showdown, which is topped off with a downbeat, slightly confusing twist.

This seldom seen retread of Halloween sat unreleased until 1987 but makes the best out of its predictability and even tosses in some jovial humour along the way – thanks mainly to the cheesy evil twin schtick, ambitious but crappy gore effects (witness the severed hand that continues moving) and plentiful dire-logue, which makes Blood Rage look like a parody of itself without even trying. And it’s still ten times funnier than Wacko.

tagged with calendar carnage, Nu-di-ty, slasher, slasher films that aren't supposed to be funny but are funny, the 80s, weird-ass twist