Sing a song of slaughter 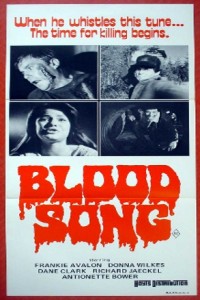 “When he whistles this tine… the time for killing begins.”

Laughter Lines: [killer, once hurt by final girl fighting back] “You hurt me… really hurt me!”

Shot under the working title of Premonitions in Oregon, this bizarre Halloween copy casts 50s beach movie fixture Frankie Avalon as a gurning psycho, whose daddy shot the missus, her lover, and then himself, leaving little Frankie a wooden flute that he treasures.

After escaping from his institution years later, like so many of these fellas do, he stalks healing cripple Wilkes (previously seen as the hysterical girl shrieking at the shark in Jaws 2 - see a shot of her in this movie in The Collection review, sitting far left, ready to wail again), who has a psychic bond with him after his blood was donated to her. Oddly, he only becomes aware of her when she spies him trying to bury a corpse.

Contrary to its set up, Blood Song tries to steer itself away from the standard slasher movie opus by allowing Wilkes’ teenage friends to survive, instead opting to off orderlies, hitchhikers, and luckless passers-by.

Avalon is predictably amusing as the woodwind-favouring psycho and Wilkes is good as the final girl, but the belief that its something better than it is prevents any of it from setting to memory.

tagged with after they were famous, slasher, slasher films that aren't supposed to be funny but are funny, star power, the 80s