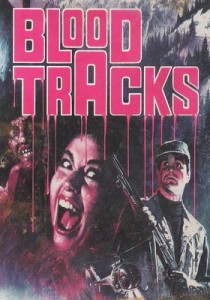 “The mountains echoed with the screams of terror.”

Dire-logue: “Look at their women – evil! They deserve to die.”

I love 80s nostalgia. Even though I can’t remember much before 1987, I always look back and smile, while listening to We Built This City. However, all rose-tinted hindsight is usually just a front for some black clouds, for us: Thatcher, yuppie-culture, the Sinclair C5 and Spandau Ballet. The legions of straight to video horror films that also belong in this category can also include this dismal Swedish affair, Blood Tracks, which uses one of the lowest form of horror cliches – thrash metal – as the centrepiece for a Hills Have Eyes-rip set in the mountains.

Solid Gold, a bad marriage of Kiss and Aerosmith on a bad hair day, are to shoot their new promo video in the snowy mountains of your stock small town where, forty years earlier, a woman stuck a knife in the back of her abusive husband and fled to the hills with her sons.

These socially-starved freaks, naturally now deformed and homicidal, aren’t too impressed by sheer amount of trespassing hair – likely causing a solar eclipse – and set about doing away with Solid Gold and their entourage, including their airhead dancers/girlfriends after they are stranded by an avalanche, which fails to stop the female cast members prancing around nude.

Why are there no remotely interesting horror movies about heavy metal bands and death? Seriously, none of them are any good. To make things worse, the film has been developed with such a low exposition that it’s near impossible to see what’s happening nor tell any of the characters apart. The band all look the same, as do the dancers and everyone else dies so early on it makes no difference.

Badly dubbed into English, I later read that Solid Gold were, in reality, a real life band called Easy Action! I wonder if even they still possess a copy of this turkey.

I can forgive Sweden for this faux pas; they gave us Volvo’s, ABBA, Roxette and decent Eurovision entries most years. I expect multiple copies of Blood Tracks are stacked up in a sauna somewhere…

tagged with accents from hell, Euro-horror, get your own ideas!, hair don'ts, Nu-di-ty, rip-off central, slasher, the 80s, who finances this crap!?