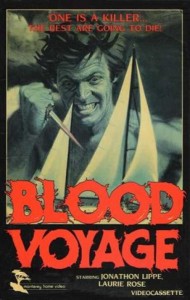 “They started as crew… and finished as shark bait.”

This pre-Halloween quickie deserves to be lost at sea. A millionaire (Hart) invites some hoity-toity friends along on a pleasure cruise to Hawaii where he and his fiance (Rose) are to be married. Among the guests are moody ‘Nam vet Andy, who is standing in for the “missing” crew member, one of the host’s patients who, of course, is suspected of the murders that begin to occur on board once land is outta sight.

Blood Voyage tries to function as a mystery but much of the dialogue is inaudible (especially on the copy I watched, which was a new VHS!) and it’s fairly obvious who the killer is and what the twist will be once most the cast are done away with. Production sucks with editing so inept that the screen freezes for ten to twenty seconds and the gaps between shots are dreadful. A surefire contender for the most excruciating 71 minutes in history.

tagged with hair don'ts, slasher, what the hell!?, who finances this crap!?