Mourn of the dead 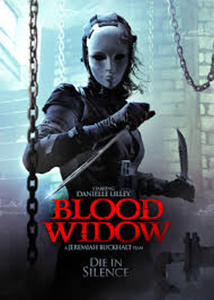 Laughter Lines: “Come on your crazy biiiii-aaaaa-eeee-tch!” (it’s all in the delivery)

Many a horror film claims to take something or other to the next level, but Blood Widow is, for a change, telling the truth. Sadly though, what it chooses to intensify is bad acting.

Amateur night performances are part and parcel when your hobby is collecting slasher films, but this makes the actors in The Dorm That Dripped Blood look like Streep and Nicholson.

With a story almost identical to (the far superior) Mask Maker, a young couple – named fucking Hugh and Laurie!? – buy an old farmhouse, which is situated next to an abandoned girls’ school where something bad happened in the late 90s. I’m thinking it was Nu-Metal.

Friends come to party and disturb the masked psychette still living there, who uses an assortment of sharp things to gut, behead, and de-limb the newcomers. Behind the admittedly creepy doll-mask, she also has ninja-lite moves and would give many a hulking loon a run for his buck. 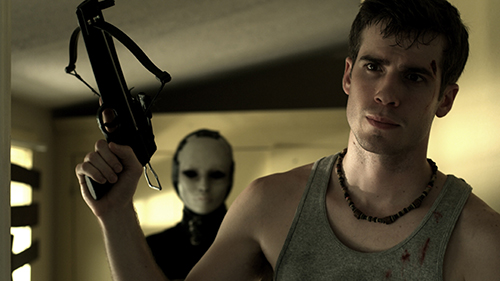 After a convenient diary turns up to backfill the questions I didn’t have, the surly heroine asks the couple who sold them the place about the incident next door, they’re like “oh yeah, we should’ve told you but didn’t want to devalue the property…”

Fortunately, everyone dies and the audience exhales at the end of the terrible, terrible acting, which borders on the suspicion that the cast were trying to outdo each other in the suck stakes.

Amusingly, special makeup effects were done by a Michael Gore and, joy of joys, there’s a sequel pending.

tagged with Nu-di-ty, slasher, what the hell!?, who finances this crap!?