Blood will flow… Talent, not so much 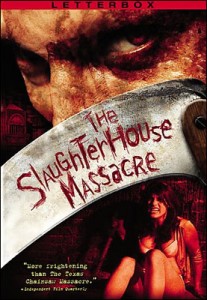 Dire-logue: “Do you think she’s hot with her big tits and no panties?”

If the world could find a single use for Simon Cowell, it would be to send him to the numerous idiots who think a camcorder, a carton of corn syrup and a nude chick kissing another nude chick will be enough to get their slasher film to DVD and just tell them no. No, in big shouty words, backed by Tina Turner singing “You’re simply the worst…” No.

With Cowell otherwise engaged ass-raping popular music, we’re left alone to suffer through the conglomerate of shit that ass-rapes the slasher genre that is The Slaughterhouse Massacre, which, according to the DVD box is more frightening than The Texas Chainsaw Massacre. Yes, yes it is, although I’m sure the original intentions that quote had quite a different sense of ‘frightening’ in mind.

Two jock-jerks and their annoying girlfriends explore an abandoned abattoir rumoured to be haunted by the ghost of Marty Sickle. Sickle, that common surname of Joe Public. Why do they always insist on giving their killers “ironic” names in these cheapo projects? Robert Hatchet. Simon Axewielder. Lucy AK47.

Sickle was lynched for a murder years earlier, of course. What else could you do with that surname? A mock seance soon brings dire consequences when the maniac is resurrected and begins killing them.

All you really need to do is copy some good scenes from other horror films to at least make it look like you know what works. And yet, here every single scene is dragged out to the maximum lengths of human tolerance in order to reach a feature running time and with only four characters in peril, things get very boring very fast.

Ancillaries are introduced only to disappear from the film long before any of the horror begins, proving that neither the budget nor imagination of the writer/director could accommodate them. So we get offensive pandering to the supposed adolescent male demographic instead with completely unrequired girl-on-girl action and intermittent stoner ‘comedy’.

The Slaughterhouse Massacre is simply the worst.

tagged with I want to die, slasher, what the hell!?, who finances this crap!?