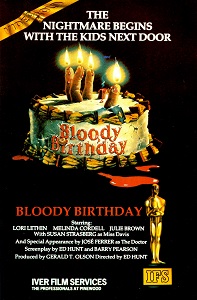 “The nightmare begins with the kids next door.”

Laughter Lines: “All her brains are in her bra!”

If you can force the ludicrous reason for the madness like a piece of vile birthday cake down your throat, this cheesy little Halloween wannabe isn’t half bad.

A trio of children born on the same day, during a total eclipse of the sun, are all missing empathic emotions and so embark on a killing spree as they turn ten. The brats-from-hell – Debbie, Steven, and Curtis (the most evil one) – are diagnosed by Lori Lethin’s astrology-loving heroine, Joyce. Joyce, really. Is that the best kick-ass final girl name they could come up with? She and her little brother, Timmy (…of course!) are high value targets due to this knowledge. 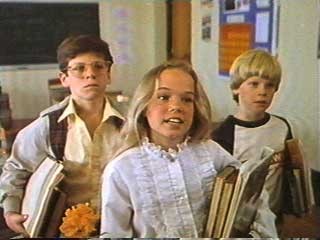 Shoddy production values are responsible for most of the damage, leaving the film looking cheap and tacky, as well as gutless for not knocking off at least one of the evil little fuckers.

Blurbs-of-interest: Lori Lethin was also in fellow clunkers The Prey and Return to Horror High; Susan Strasberg was in Sweet Sixteen; Elizabeth Hoy and Billy Jacoby were in X-Ray.