To Sir With Blood 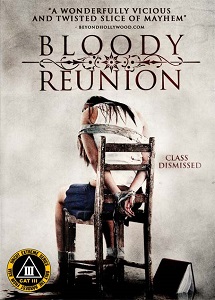 Laughter Lines: “Just go if you need to shit.”

South Korea has given us a few decent slasher films over the last few years: Nightmare, Record, the awesome Death Bell and its sequel. Bloody Reunion sits nicely in the group, the title giving away much that you need to know in terms of plot. Mild spoilers follow.

A group of young adults gather at the home of their elementary school teacher, Mrs Park, whose poor health indicates this might be the last time they get to see her. The reunion has been organised by nice girl Mi-ja, who serves as a sort of live-in assistant to the woman, and the attendees include the usual types: the funny guy, the moody biker type, engaged but seemingly miserable couple, a girl who permanently keeps her shades on and talks about how good she looks these days.

Through intermittent flashbacks, we learn that Mrs Park gave birth to a deformed son who was locked in her basement after her husband, unable to deal with the child’s looks, hanged himself. It also transpires that, despite attending the party, none of the students actually really liked Mrs Park, and each recall her nastiness towards them, be it rejecting her ‘Teacher’s Day’ gifts, highlighting they were from a poor family, or mocking them for crapping themself in class. 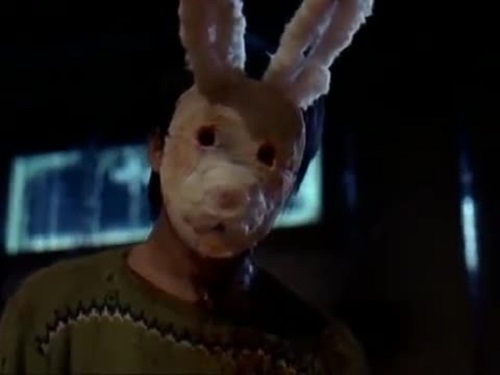 Arguments ensue, weird scenes unfold, a bunny-masked loon begins stalking them with a box-cutter, making one guy swallow razor blades and stapling a girl’s eyelids (open or shut, I can’t remember). Everyone suspects fellow aide of Mrs Park, Jung-won, who was the only member of the group nice to her absent son. Hmm…

Bloody Reunion tosses us a curveball at the end, which makes things certainly more interesting, but a bit confusing in a sub-Haute Tension manner: Did that person even exist? Did any of this happen? Huh? Don’t expect all your questions to have been answered. And don’t eat the cake.