Where are Brennan & Booth when you need them? 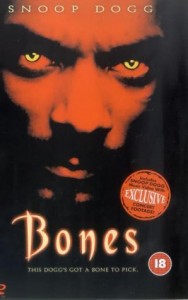 A sort of Blaxploitation reworking of themes from A Nightmare on Elm Street (and also from New Line, no less) in which a group of ambitious siblings purchase creepy gothic house in a bad neighbourhood where they plan to open a nightclub. The house contains a legend of its own as the murder and burial place of 70’s big cheese Jimmy Bones, who was shot and shanked by a group of drug pushers with whom Jimmy refused to play ball with.

His skeleton is uncovered and, post dog-mauling and rain of maggots, he sets about taking revenge on his killers, who have taken the once progressive berg and turned it into a rotting ghetto.

With almost a full hour before Bones rises from the grave, there’s mucho suspicious padding and hard to follow characters (most of whom die) before things go totally Krueger-ville when the final few parties involved are sucked into a parallel dimension to duke it out with help from Bones’ psychic ex-beau (Grier in a gruesome green all-in-one for the finale) and his unknowing daughter, Cynthia (Buffy alumnus Lawson).

More than anything, Bones stands out from the pack by sgiting the usual white middle-class setting (which is duly referenced a la Jada Pinkett’s ‘exclusion’ rant at the beginning of Scream 2) to the nightmarish streets of a decaying urban hellhole where drugs and guns are plentiful and people have little to lose. However, the out of place middle class brothers and their whiter-than-white sister adequately paint a picture of hope through determination that tries to pass itself off as a subtextual undercurrent…

Not as annoying as most other rapper-in-a-horror-film efforts, listen out for the funny “KFC is run by the KKK” speech.

Blurb-of-interest: Katharine Isabelle was Gibb in Freddy vs Jason and was also in See No Evil 2 and Ginger Snaps (and maybe the sequels, I’ve only seen the first one).

tagged with after they were famous, Halloween, one two Freddy's coming for you..., rip-off central, slasher, star power, weird-ass twist