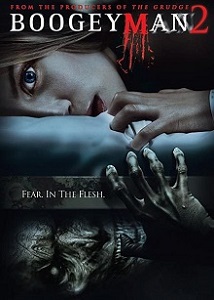 “Fear in the flesh.”

Laughter Lines: “She fears a specific entity, the clinical term is Boogeyphobia.”

The original 2004 Boogeyman was a cheap, terrible-CGI ridden fun sponge that inexplicably took more than double its $20m budget, in spite of sub-basement level reviews. This made-for-DVD sequel largely distances itself from it to form a straight-up slasher flick that owes more than a small debt to A Nightmare on Elm Street 3.

Pre-teen siblings Henry and Laura see their parents butchered by a cloaked madman their PTSD decides is the Boogeyman. Ten years later – never nine, never eleven – Henry leaves a clinic with a renewed sense of control and recommends Laura undergo the treatment they’re providing teens with an array of phobias: There’s a germophobe, agoraphobe, a self-harmer, an anorexic, etc.

Several of them have almost exactly the same Justin Bieber hairstyle, which is far more damaging on a psychosomatic level.

Naturally, the killer exploits these fears into a series of gruesome – very gruesome – deaths that initially look like suicides: Germ kid drinks bleach after finding cockroaches in his chips; agoraphobe is literally ‘opened up'; maggots are put into self-harmer’s skin so she hacks them out with a blade; anorexic girl is pumped full of fat until she bursts. All of the teen cast reveal nothing more than their names and what they’re scared of before they meet extremely grisly and sadistic ends that probably wouldn’t stand just a decade later. It does walk a line, but then the essence of horror is to be horrible.

Where Elm Street 3 pivoted much of its misery against interesting group therapy sessions and the like, Boogeyman 2 ignores going too deep into the psychology, hopping from doomed kid to doomed kid with little separating the scenes of their demises other than Laura trying to convince everyone the B-word is real. Tobin Bell’s red herring shrink mutters a few big words here and there to make it sound like someone at least tried to inject some psychobabble, but for the most part it’s off-the-shelf slasher fodder. Is it all just one big experiment to help Laura?

The killer, when revealed, is not remotely surprising and little effort is made to throw the viewer off guessing correctly, but it wraps things up neatly enough so that Boogeyman 3 was able to start anew. But there is a decent and icky final twist chucked on and the chat-track on the DVD mentions that they tried to conjure up memories of Amy Steel in Laura’s final act, which means they at least know a good final girl when they see one.

Blurbs-of-interest: Apart from being, y’know, Jigsaw, Tobin Bell can be found in Buried Alive; Matthew Cohen was in Chain Letter; director Betancourt served as the editor on the remake of When a Stranger Calls.