Day Three: Let’s get to the funny. 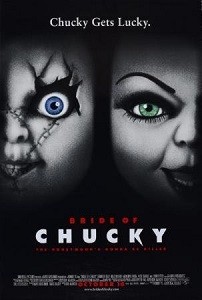 After the series suffered the damage of the bullshit allegations levelled at Child’s Play 3, which was also Don Mancini’s intended jumping-off point, it looked like the world had seen the last of Chucky. While the likes of Puppetmaster vs. Demonic Dolls ground on straight to video, the slasher genre, all but dead and buried, was shocked back to life courtesy of Scream and, naturally, all those franchises that helped build it first time around were ripe for re-picking.

Halloween H20 was first off the marks in the summer of ’98 but Chucky Inc were quick to cash in, overhauling the unintentionally (?) funny schtick of the formula and going for all-out self-referencing black humour. 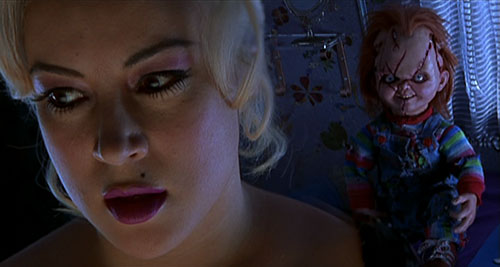 Shortly after the events of the last film, Charles Lee Ray’s girlfriend Tiffany manages to get a crooked cop to hand over the dismembered remains of the Good Guy doll. She stitches and staple-guns him back together, adds new limbs, and consults Voodoo for Dummies to complete the resurrection spell. However, getting Chucky back does not result in the romantic reunion she hoped for, as the ring she assumed was a marriage proposal for the best part of a decade was in fact acquired from one of Chucky’s last victims.

Heartbroken, she imprisons him in a crib and gives him a talking bride doll as company. Ever resourceful, Chucky breaks out, electrocutes Tiffany in the bath and resurrects her spirit into the bride doll. Needing to get to an amulet that was buried with Ray’s body, Tiffany calls her hunky young neighbour Jesse and asks him to transport the two dolls to New Jersey. 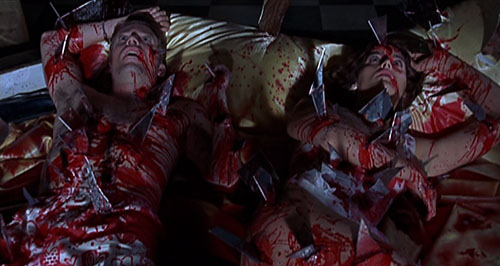 Jesse collects girlfriend Jade, who is under the rule of her ass-hat police chief uncle (the late Ritter) and they drive off for a new life unwittingly with a body in the back of the van. Anxious to bring him into the 90s, Tiffany and Chucky trade inventive methods of dispatching their victims, including nails catapulted into the face, immolation by car, and a memorable shattered glass ceiling raining on to a couple on a waterbed.

In the meantime, Jesse and Jade – married in a drive-in chapel – suspect each other of the murders that are following them, eventually forcing Chucky and Tiffany to reveal who they are and what they need. The quartet continue on towards the cemetery before Ray’s body is exhumed (his fingerprints were found at an earlier crime scene) and the sexy teens manage to turn the two of them against one another and make a break for it. 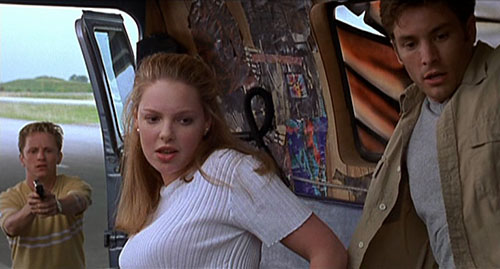 Whereas the Child’s Play trilogy were horror movies with some comedy, the Chucky films (all titled Blah ‘of Chucky’ hereafter) are black comedies with some horror elements – but it works better given the central premise is that the killer is a doll that nobody thinks to just step on. The addition of Tilly’s Tiffany is gold and, while possibly the joke is overdone in the next film, it’d be near impossible to revert things to the unsettling is-it-the-kid? tone of the original.

While Tilly and Dourif relish in their voice-roles (and Tilly is also a blast beforehand), there’s great support from Ritter as the slimy patriarch, Alexis Arquette as Tiff’s wannabe-badass plaything, Kathy Najimy as a housekeeper, and – gasp! – a gay character! Well, he gets hit by a truck rather than murdered by the dolls, but there’s a little progress there. Jesse and Jade are acceptably highschool sweetheart leads, any presence they have dwarfed by their 36-inch counterparts, but Heigl and Stabile do their best with what they’re given, they’re just a little too perfect and beautiful. 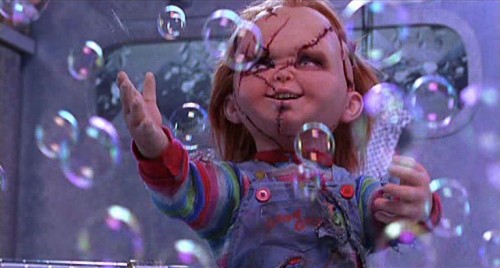 Bride of Chucky is the epitome of a fun horror flick: It’s gloriously far-fetched and stupid, but never stoops to fart-gag level humour for its multitude of LOLs.

Blurbs-of-interest: Tilly was in Far From Home in the late 80s, and later featured in The Caretaker; Dourif was in Trauma, Urban Legend (the cop at the start was also in this as the car accident victim in Alicia Witt’s flashback), Rob Zombie’s Halloween remakes, Dead Scared, Chain Letter, and Color of Night; Katherine Heigl cameo’d in Valentine; Alexis Arquette was in Children of the Corn V; Lawrence Dane was in Happy Birthday to Me. Ronny Yu directed Freddy vs. Jason a few years later.