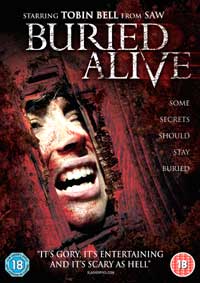 Is Tobin Bell the new Pleasence or Englund? He seems to be cropping up in more and more obscure B-movies these days on the back of the Saw-travaganza. Good for him though, he’s pretty cool, ain’t he?

Anyway, Buried Alive isn’t Tobin-centric, he’s a red-herringy bit-parter this time round as a grizzled custodian at the ranch where collegiate cousins Zane and Rene – who’re a bit too close for comfort – bring a gaggle of friends for the weekend to party hard, initiate new sorority pledges and fall victim to a girl-ghoul who’s severely pissed off about something. She appears mostly to Zane (Jay) who has “stopped taking his pills” and can therefore see what nobody else does. Until later when suddenly they all can. Or something. 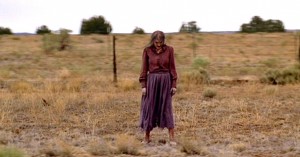 Zane and Rene are of the belief that their ancestry is cursed, having something to do with their great-Grandfather burying his Native American wife alive, a big fire and a symbol on a talisman that protects those who wear it. It’s a confusing backstory that’s dragged out amidst hazing pranks and sexual exploits before the slashin’ begins, courtesy of the decomposing missus, who likes to bury axes into young academics, or chop them in half or slice their faces off… 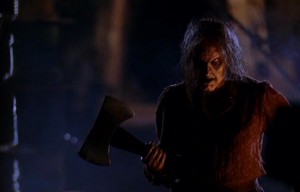 While we are privy to the cut n’ dried character cut-outs of the geek, the obnoxious jock and the sorority bimbos, it becomes clear that one of the pledges is a dark horse who not only knows a lot about symbolism and its relative lore but has the design from the talisman tattooed on her back, which saves her from becoming the resting place for the killer’s axe.

The second half of the film really cranks into gear, taking cues from recent J-horror hits and ending with a nicely done sorta-twist. Even with the upsurge in quality towards the finale (a reversal of what normally happens in horror films, which have a tendency to start well and go downhill), it’s a case of too little too late for Buried Alive to be much more than a passing interest. 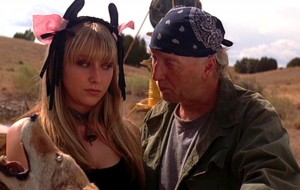 Blurb-of-interest: Bell’s other recent foray into supernatural slasherism is Boogeyman 2.