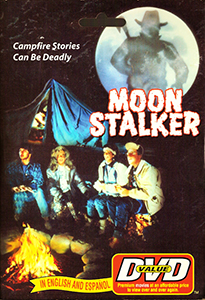 “There’s a bad moon rising… and it just got worse!”

Dire-logue: “So the guy doesn’t stop for hitchhikers – doesn’t exactly make him Jack the Ripper.”

For a while I wondered if seldom-heard of horror flick MoonStalker was going to be a slasher version of Michael Jackson’s Moonwalker, like there was a film called Slashdance. Let me cancel that raised-eyebrow expression from your face now by telling you that it’s not.

Instead, seldom-heard of horror flick MoonStalker is a super low discount price campers-in-the-woods flick shot in Nevada that mixes bits of Madman with Friday the 13th and features the most unashamed Halloween knock-off theme music this side of He Knows You’re Alone.

Don’t be distracted by my three-star rating however, MoonStalker manages to both suck and blow in unison but it does so with an endearingly naff charm. It’s a kindergarten carol concert: shit but cute.

The POV opening episode sees six teens attempting to dance around a campfire in the snow while someone watches from the trees. Two of them take leave to go and do the dirty in a caravan and are quickly axed off-screen. The fate of the rest of the teens is left to us to decide, but let’s pretend they all died for their Strictly Come Swaying and Waving Your Arms Around Mentally sins. Camera pans up to the full moon – roll titles… 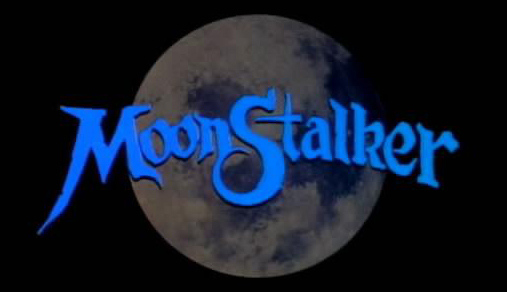 After the credits, which run alongside the Halloween cover version, the “action” shifts to what looks like the family camping trip from hell. If you’re family is made up of the least talented members of the local theatre group. While Dad shouts his lines and tries not to look directly into the camera, Mom just wants to watch soaps on the fabulous portable color television and their two kids – a bratty daughter permanently fused to her cassette Walkman and a suspiciously camp son – whine about going to LA instead. Oh, but they tried so hard!

The serenity is soon ended by the arrival of an old man, originally going by Pop, towing a crappy caravan. They talk fishing and his son Bernie, who, it turns out, is chained up in the caravan and let out with his axe to off the family because he hates campers. Pop suddenly dies of a heart attack during the massacre, leaving poor Bernie to go it alone but with a spunky new RV!

Eventually, Bernie kills and replaces a guy on his way to a ‘Wilderness Counsellor’ training camp (to earn certificates – woooo!!!), which appears to consist of a few tents around a campfire and has a sign made out of a piece of card and felt tip pen. It’s a tad late to introduce the supposed ‘main characters’ but MoonStalker doesn’t care – MoonStalker plays by it’s OWN rules!

Nice guy Ron and bespectacled joker Bobby welcome probable heroine Debbie to the camp. She turns up in an undependable old car and echoes of Amy Steel abound. The camp is run by Third Reich wannabes Regis and Marcie, who like to engage in combat sex when he’s not ordering around his delegates, which are the array of usual horny teens, some of whom barely register on screen before being killed off by Bernie, who has slain and taken the place of one of the overdue attendees, opting for a stetson and reflective shades over the actually-quite-creepy mask he wore to kill the bad acting family. 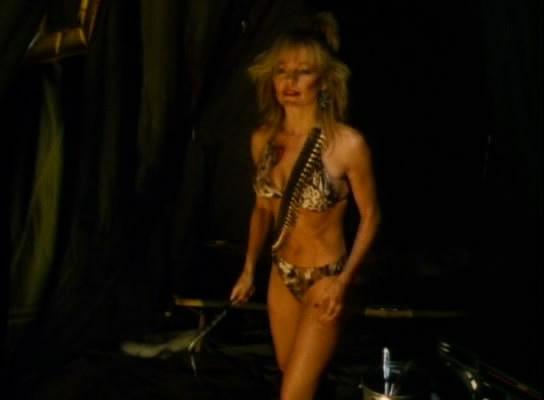 Everyone has, or tries to have, sex. Which is weird because there’s snow everywhere and nobody particularly exudes much hotness. Curiously, I didn’t spot any boobs – even during the shower shag moment. Bernie kills most the gang off screen but lops off a couple of limbs and the shower girl is seemingly murdered by having hot water sprayed on her face for about two thirds of a second.

But MoonStalker undoubtedly peaks with a loon-made ropes-and-planks contraption that keeps a line of corpses swaying to and fro while a tape of two guys singing ‘She’ll Be Coming Round the Mountain When She Comes’ plays from behind a tree! It provides a bonafide ‘LOL’ moment that ensures you’ll at least remember something about MoonStalker.

Still, I had to watch the end twice to try and figure some things out:

MoonStalker is bad fo’ sure! You’d be hard pressed to find a more by-the-numbers camping slasher flick from this era, but the fact that it was shot on film rather than video and it’s rebellious does-what-it-feels-like nature lends it a likeable sort of fascination that just about overrides the train wreck acting (especially from that family), cruddy effects work and vision-molesting fashion choices.

Also, I hope the actress whose name is the staggeringly brilliant Sioux-Z went on to become mega famous. I don’t think she did though. 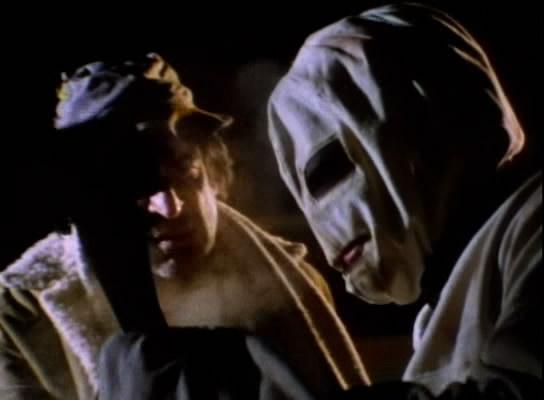 tagged with don't give the day job, Friday the 13th, get your own ideas!, hair don'ts, rip-off central, slasher, slasher films that aren't supposed to be funny but are funny, spoilers, the 80s