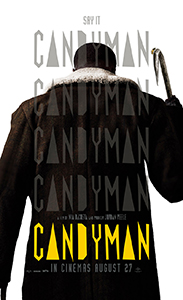 Laughter Lines: “Ain’t a dick on the planet good enough to offset a demonology hobby.”

Look up the user reviews for this on IMDb and you’ll see all manner of people declaring it the worst thing they’ve ever seen, calling it racist because “only white people die!!!11!1!” (not true if you pay attention), without commenting on any other facet – there’s no reflection on the aesthetics, the production design, the direction, the acting: All of which are top drawer. Some spoilers follow.

I can’t be the only person sick of hearing people call anything and everything at odds with their worldview ‘woke’. It’s become the new term for conservative-leaning types to bulldoze the things they see as left aside without having to justify their judgement. I’ll be writing something else about this and how it relates to slasher films at some point, but it carries some weight with the new Candyman film because, if we’re alert and aware enough to appreciate the origins of what woke means, it has its place here. 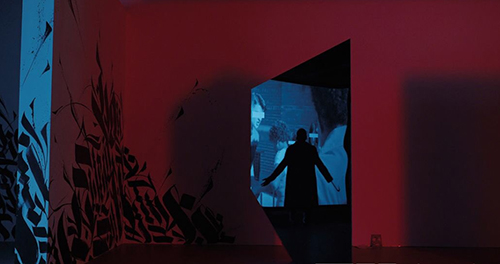 We haven’t seen hide nor hair of Daniel Robitaille since 1999s rather dismal Day of the Dead and, following his recent success with Get Out and Us, Jordan Peele’s involvement with slasherdom’s only prolific black killer seems perfectly timed. But what to do? Unlike most of his brethren (save for Freddy), it’s not easy to just recast the role of an undead, and thus un-aged, mythical blood-shedder, so what to do without Tony Todd…

Conveniently to the plot, time changes everything, including Cabrini Green, which has been gentrified, and is home to artist Anthony and his art dealer girlfriend Brianna. It’s no real secret from the get-go that Anthony is the grown-up baby abducted by Candyman in the 1992 movie. Brianna’s brother Troy shares with them the legend of Helen Lyle, who is locally remembered as a madwoman who tried to kill the child. 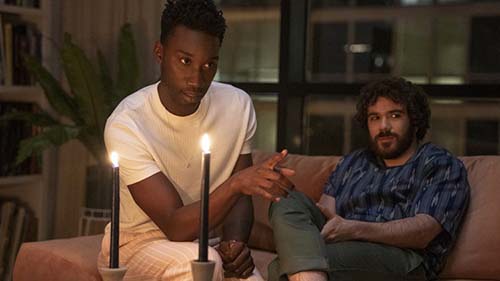 Intrigued by this but unaware he is said child, Anthony explores what remains of the projects and meets one of the few remaining residents, William Burke, who tells him about the legend of Candyman, however in this telling, the hook-handed one was a rather harmless eccentric named Sherman Fields who, in the 70s, gave out candy to the local kids. When a white girl found a razor blade inside a sweet, the cops blamed Sherman, who went into hiding inside the walls of the apartments. A young Burke encountered him one day, screamed, alerting the cops, and they beat the man to death.

Anthony is galvanized by the concept raised around the subject of gentrification and racial injustice. His work at a gallery show draws condescending dismissal from snobby critic, Finley. Yet when the letchy gallery owner and his intern say ‘Candyman’ five times into the mirror that makes up part of Anthony’s piece, they’re hooked to death and suddenly the artist’s work is getting attention, much to the concern of Brianna, who found the bodies and pretty much inherits the running of the gallery.

Finley is murdered next when she invites Anthony over to ‘reassess’ his work and he dares her to summon up Candyman; Then a group of high school girls try it out in a campus bathroom. Unravelling, Anthony visits his mom (Vanessa Williams, reprising her role and looking only a few months older than she did in ’92) to find out the truth surrounding Helen Lyle and Candyman. Brianna is also trying to find him and tracks his movements to the laundromat where he met Burke, where she is abducted and forced to watch while Burke transforms a honeycomb-skinned Anthony into the next Candyman, rapidly explaining that he witnessed his own sister slain by the ghost of Sherman Fields, and understands Candyman ‘recruits’ black men killed by white systemic violence.

The final twenty minutes or so of Candyman seems rushed and murky. I had to look up an explanation of the climax and then watch it back to make sense of it. Burke’s flashback seemed shoehorned in without a clear transition between the scenes. The same goes for the threads surrounding Brianna and Troy’s artist father – it’s left curiously unresolved (for now at least) and made me wonder if the cutting room floor was full of extra material that would have fleshed out these strands and tied things up a little more neatly. 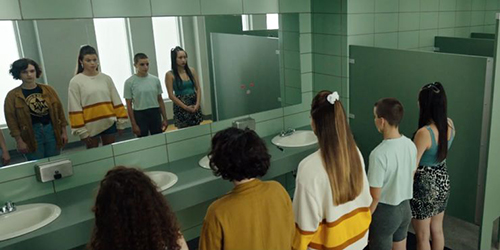 Where is Tony Todd, you caw? Fear not, he appears, seemingly as the grandmaster of the ‘Candymen’ so to speak. As the residents of Cabrini, before it was demolished, put a moratorium on the mention of his name, he ceased to exist as a legend until Burke succeeded in recruiting Anthony back into the fold, making him the most recent avatar for the story to continue and spread. It’s fiendishly clever and evil on Candyman’s part (kinda reminded me of Freddy using Jason to kill in Springwood so that he would be recalled to mind).

DaCosta’s direction is heavy on mood, with a truly unsettling opening credits that reverses the overview of Chicago to an underview, where we’re forced to look up, and the use of shadow puppetry is a great aesthetic. There’s also an appealing lead in Yahya Abdul-Mateen II as Anthony, and a refreshingly without-comment depiction of a gay couple in Brianna’s brother Troy and his boyfriend Grady, also allowing one of my favourite lines when the latter suggests they try the Candyman chant at the art show, to which Troy quips: “Black people don’t need to be summoning shit!”

So what about all the ‘racism’ then? Sigh. I’d say to those people crowing about it that they need to consider films one to three were told through the lenses of white characters, specifically white women haunted by Candyman, and now the perspective has shifted to be seen from black characters. And that’s about it. Yes, most (but not all) of the victims are white, but it’s not as if the black characters come out of things unscathed in any way: The film’s major villain is black FFS! In short, the type of people overusing the term ‘woke’ to object to things they don’t like just need to get the fuck over themselves and, while they’re at it, choke on the fact that it made bank. Gimme those sequels.

tagged with sequel city, slasher, spoilers, suck it, yo! Hollywood