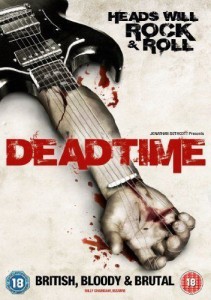 Love Meets Murder, once hailed as “Birmingham’s hottest band” but now struggling after a flop album, are given one final chance to succeed by being packed off to a skanky old warehouse and locked in to make a video.

There, they and their entourage are stalked by killed by a sack-headed loon for some Satanic reasons I was too bored to remember minutes after the unmasked killer ‘fesses up. Despite not previously visiting the place, the killer also manages to erect a secret satanic tableau upstairs…

While Britain may be famous for gritty drama, we haven’t produced that many great slasher films and Deadtime is no exception. Like the fictional band, it’s riddled with almost every cliche in the book: Rock bands and psychos. When will there be a boy band done in by a maniac? Or a classical orchestra?

People wander off for sex in the middle of a rampage, nobody can hear high-pitched shrieking coming from a few feet away, they over-react when nothing happens and under-react when somebody dies in front of them. They also elect NOT to call the police after the first murder as it will “shut down the last chance for the band”… About the only surprise on the cards is that the black couple are cast as the heroes. What few other interesting characters there are are sidelined and summarily murdered.

The skinny killer, once revealed earlier than usual, minces around in a sort of half-assed but strangely entertaining Johnny Depp Pirates of the Caribbean impersonation, and is hardly a musclebound psychopath you’d run from in his leather trousers and receding hairline: This band already looks twenty years past their hey-day.

Horrendous cheap CGI only compounds the manure that this movie seems determined to bury itself in. A machete up the arse, decapitation by frisbee’d cymbal, pool cue through the head, exploding noggin… none of it looks as good as it may sound. 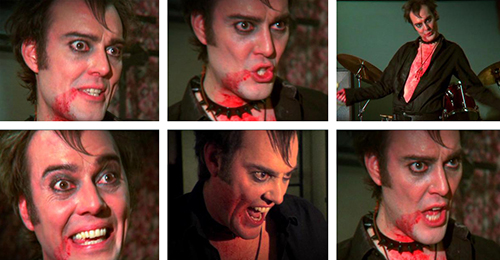 Things might have been better had the film something to say about the music industry, but it’s just so by the by; a slasher movie strictly going through the motions. Rock band slasher flicks aren’t a rarity, Groupie, Blood Tracks, Terror on Tour, Rocktober Blood, Dead Girls, Slash… There’s nothing here that’s not in any of those, save for a few Brummie accents.

Watch out for the corpse that closes its eyes before being touched by the fingers of the person laying them to rest. And Leslie Grantham and Terry Christian’s phoned-in cameos (literally in one case). And the bassist from Judas Priest.

tagged with after they were famous, gore o'clock, Nu-di-ty, Rule Brittania!, slasher, spoilers, what the hell!?, who finances this crap!?