“Sometimes we’ve got to cut ourselves just to make sure we still bleed.” 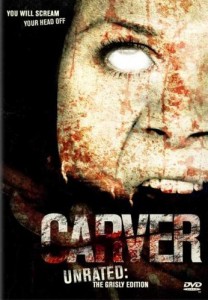 Isn’t it funny how psychos have such unique names. This is questioned in Dark Ride, indeed why is it always Jeremiah, Elias, or Isaac? And if your surname happens to be Slaughter, Gore, Knifey, Cutty, or Carver then it appears you can skip that career aptitude normalizing test (Ms Hoover: “…or cant.”)

Brothers Pete and Bryan and trying for some before-college bonding and meet up with their fun lovin’ criminals friends Zack and Rachel for the trip, where they soon run into Kate, another camper whose friend has gone AWOL (actually decapitated at the beginning).

The kids befriend the part-disabled bar owner, Billy Hall Carver, and accept free drinks and fifty bucks in return for clearing out some junk from his barn, where anti-wilderness Bryan turns up some old film reels that feature what look to be amateur slasher flicks…with very realistic effects work. The rest of the gang take no heed of his paranoia and enjoy a night of drunken partying, during which Zack meets a very icky fate at the hands of Billy’s obese brother Bobby, who first drags the boy off the can and handcuffs him to the wall, then rips the shit-covered fitting from the wall and empties its contents over the boy before taking a wrench to his genitals and squeezing until his balls burst – like, literally at the camera! I expect all male viewers crossed their legs at this point.

Meanwhile, Pete convinces his brother to return a stolen reel of the maybe-snuff-movie to the barn, where they are soon boxed in by Bobby, who is hauling a corpse back for further dismemberment and soon turns his attention to offing them one by one as they struggle in vain to find a means of escape, which leads to a painful arm-under-a-heavy-door scene, which, in addition to your crossed legs, will have you folding your arms around yourself, Carver evidently being produced by Yoga enthusiasts.

Despite its grisly nature and lots of seen-it-all-befores, it is the assembly line elements that work in favour of the picture, rather than against it, wisely avoiding the usual dumb-character pitfalls (save for a couple of fatal misjudgements). Bobby likes to kill to the tune of a cheery country song about a turkey in the straw (“hee-hee-haw”), which provides a surreal audio backdrop to the scenes of horror.

Nominating a final boy is also something a bit different to the usual fare, although his actions towards the end raise questions, with a not-so-twisted twist pulled out of the bag as if we hadn’t seen it chugging down the roads towards us ages ago… Even so, there’s some enjoyment here, thanks in main to characters who haven’t got ‘obnoxious moron’ stamped on their foreheads and nice interplay between the actors.