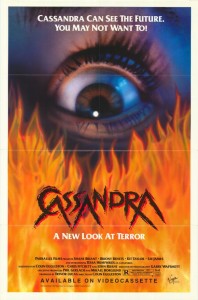 “Cassandra can see the future, you may not want to!”

Available on video cassette. We’ll never see those words at the foot of a movie poster again, likely. I miss the 80s. Let’s all grow our hair into dried out bouffants and pretend we’re still there. In Australia. Being stalked.

Dream over, this arty export from down under from the producer of 1980’s Stage Fright (a.k.a. Nightmares) mixes wannabe-Argento stylings with the plot of The Initiation, which sounds a bit like swirling bechamel sauce around with ice cream. Ugh.

Things begin creepily enough with the suicide of a young woman as witnessed by a small child, seemingly at the command of an evil little boy to the sounds of a siren-like score, further proving that children are, in fact, inherently evil. This is the dream that torments titular heroine, Cassandra – the daughter of a fashion photographer who is having an affair with his pregnant model.

When Cassandra discovers them together, the family portrait begins to crack. Then the model is murdered, accompanied by a message in her mirror that reads; “Who killed Cock Robin?” – child-like dialogue from the nightmare. Weird. Cassandra finds sanctuary in the company of her friend Robert and later discovers that her parents are, in truth, siblings and the woman who committed suicide in the dream was her birth mum.

Meanwhile, the knife-toting killer does away with a few others, including a good decapitation with a shovel, before we reach the disappointingly anti-climactic finale in which the obvious conclusive elements are revealed to an audience who figured it out twenty minutes earlier. Well, all of it bar the Cock Robin references anyway.

Cassandra is a prime example of those weird Australian horror movies you get every now and then. They make the most of the often never ending landscapes that just ring the dread and fear bells long n’ loud with the abject nothingness of life beyond city limits. It’s ambitious, littered with visual trickery that peaks during the stalking sequences around the photo studio and is let down mostly by a slack first half hour and the predictable ending. They should’ve tried a bit harder to conceal the killer’s identity, which is made all the more glaringly evident by the limited number of characters. Like all arty horror things, nice to look at but a bit skeletal otherwise.

tagged with children are evil, obvious identity of killer, Oz, slasher, the 80s